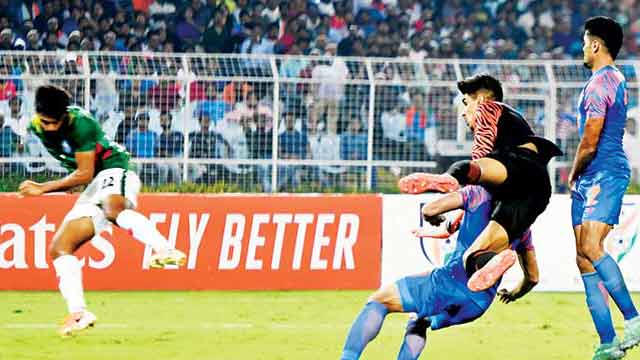 Bangladesh came agonisingly close to beating India in their World Cup qualifiers before settling for 1-1 draw in the highly-anticipated contest at Salt Lake Stadium in Kolkata on Tuesday.

Forward Saad Uddin struck in 42 minutes to help Bangladesh take lead against the run of play before they nearly defended it only for Adil Khan to break their hearts two minutes from the time.

The charges of Jamie Day gave their blood and sweat to test the nerves of higher-ranked Indian side and keep a sale-out local crowd on their toes with their superb display.

With a little luck they could easily come out victorious as one shot hit the side post in the second half while another shot was cleared from the goalline by an Indian defender minutes later.

With no video assistant referee available in the game Bangladesh had to accept the decision of Syrian referee, who often left Bangladesh players wondering with his one-eyed decisions.

The VAR, if available, could have been called into action in the very first minute when Bangladesh midfielder Mohammad Ibrahim raced into box down the left side to be thwarted by Indian right-back Rahul Bheke.

Referee Masoud Tufaylieh ignored Bangladesh’s call for penalty much to the relief of Indian side, who soon took the control of the game.

Bangladesh goalkeeper Ashraful Islam Rana, who was brilliant throughout the game, gripped a volley of Sunil Chetri in the fifth minute and saved a header of Manvir Singh in the 35th minute with a fingertip for a corner.

Saad silenced Salt Lake Stadium three minutes before the break with his superb finish as he headed home a Jamal Bhuyan free kick from the left side to put Bangladesh 1-0 ahead.

The vision of Indian goalkeeper Gurpreet Singh was blocked by defender Bheke after Jamal’s pin-point accurate free-kick and Saad took full advantage to score Bangladesh’s first goal of the campaign.

Bangladesh took a defensive strategy after scoring the goal but were not shy away from going for a counter attack once they got an opportunity.

It nearly earned them their second goal when Saad broke through Indian defence from the left-side to take a shot that shockingly hit the far post in the 55th minute.

They came close to scoring again in 73rd minute as Nabib Newaz Jiban beat an advancing goalkeeper Gurpreet to chip in an empty net but Adil Khan rushed in to save it from goalline with an acrobatic attempt.

Bangladesh made three defensive substitutions in the second-half and played with their hearts out that made India nervous with every passing minute.

When the handful of Bangladesh fans present at the ground started counting time India levelled as Adil found the net with a powerful header after a corner from Brendon Fernandes that gave Bangladesh goalkeeper Rana no chance to move.

The goal settled the nerve of India, who made few feeble attempts in the last few minutes but Bangladesh did not make further mistake to leave the field with a creditable draw.