'Who understands cricket in this room?' 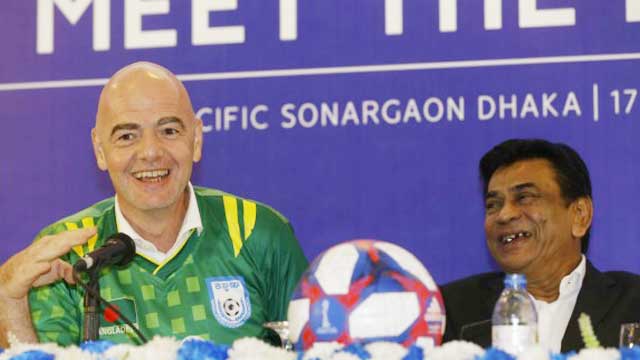 Cricket is widely thought to be much more popular than football in Bangladesh, but FIFA President Gianni Infantino was humorously dismissive of Bangladesh’s number one sport.

Infantino, who was invited to the country by the Bangladesh Football Federation (BFF), visited Bangladesh on Thursday. Part of his itinerary on the half-day visit was a meet-the-press event at the Pan Pacific Sonargaon, where the Swiss had a cheeky reply when asked about cricket’s pre-eminence over the beautiful game.

“I don’t think cricket is the most popular sport here, but football is. Does anyone understand cricket in this room? Only one?” Infantino asked, causing a huge round of laughter in a room full of football journalists and officials.

Football has been riding a wave of popularity in recent times, with the Bangladesh national team notching some impressive performances. On Tuesday, they narrowly missed out on beating India in the 2022 World Cup qualifier in Kolkata, five days after putting up a brave performance in a 2-0 defeat against Asian Champions Qatar at home.

“How many countries play cricket? 10? 12? When you play with 10 or 12 countries, it is easy to go up the table. But 211 countries play football and that is why it is so competitive and so popular in the world,” Infantino added.

The Swiss also met Prime Minister Sheikh Hasina at the Prime Minister's Office, before going to a meeting of the BFF executive committee members.

Infantino, who was the third FIFA boss after Sepp Blatter and Joao Havelange to visit Bangladesh, left for Laos in the afternoon.