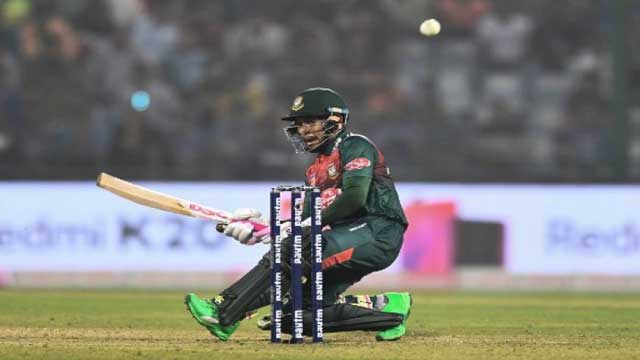 Mushfiqur Rahim struck unbeaten 60 off 43 balls after their bowlers did decent job as Bangladesh beat India by seven wickets in the first of three Twenty20 international series at the Arun Jaitley Stadium in Delhi on Sunday.

Mushfiq hit eight fours and a six in his splendid knock and was well supported by Soumya Sarkar, who made 39 runs as Bangladesh reached 154-3 in 19.3 overs after restricting the hosts to 148-6.

Mushfiq and Soumya added 60 runs for the third wicket after the visitors were held to 54-2 but Soumya’s untimely dismissal to Khaleel Ahmed gave India a slight edge in the contest.

However Mushfiq, who was dropped on 38, kept his cool and struck the same bowler for four consecutive fours in the penultimate over and took Bangladesh close to the victory.

Skipper Mahmudullah hit the winning shot for a six of debutant Shivam Dube and helped Bangladesh register their first ever Twenty20 win over India in ninth attempts.

Indian opener Shikhar Dhawan top-scored with 41 off 42 balls while Rishabh Pant and Shreyas Iyer made 27 and 22 runs respectively but Bangladeshi bowlers took regular wickets and at one stage they reduced the hosts to 120-6 in the 19th over.

However, Krunal Pandya (15 not out) and Washington Sundar (14 not out) hit some late blitz and put up an unbroken 28-run stand off just 10 balls, helping India to reach close to 150-run mark.

Shafiul earlier gave Bangladesh the first breakthrough in the last ball of first over by trapping Indian skipper Rohit Sharma in front for 9.

Aminul dismissed Lokesh Rahul for 15 in the third ball of his first over while he also got rid of Shreyas Iyer for 22, helping Bangladesh stay in control.

Dhawan was next man to be dismissed as he was run out by Mahmudullah while part-timer Afif Hossain took a spectacular one-hand catch of his own bowling to dismiss Dube for one and firmed Bangladesh’s chances in the match.