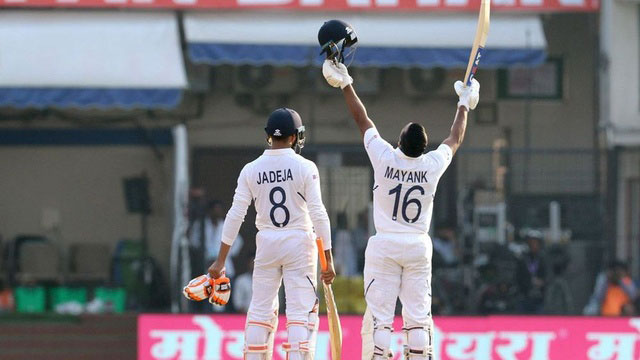 Mayank Agarwal smashed his second double-ton in just seven Tests he played and helped India extend the lead to 343 at the end of day-2 of Indore Test against Bangladesh with four wickets in hand.

Mayank ended on 243 off 330 balls with 28 fours and eight sixes. He was hunted by Mehidy Hasan Miraz. It was Mayank’s best Test innings in his seven-match career so far.

Resuming their overnight total of 86 for 1, India ended day-2 scoring 493 for six in 114 overs. It means they scored 407 runs on day-2, which the third highest score for India in a single day of a Test.

Along with Mayank, Cheteshwar Pujara, Anikya Rahani and Ravindra Jadeja also did well with the bat scoring 54, 86 and 60* respectively. Umesh Yadav also raised eyebrows during the last few overs of day-2 scoring 25 runs off 10 balls with three sixes. He remained unbeaten on 25.

The first session of the day was shared between two teams when Bangladesh removed Pujara and Virat Kohli in quick succession. Pujara fell for 54 while Virat suffered a rare fate in Tests - a duck- off two deliveries.

However, in the afternoon session, Bangladeshi bowlers failed to grab any wickets.

In the fourth-wicket stand, Mayank and Rahane added 190 runs to the board. Mayank and Jadeja added 123 runs in the fifth-wicket pair. And along the way, India’s lead passed the 300-run mark.

Taijul Islam and Mehidy Hasan Miraz bowled 55 overs together and returned only a wicket conceding 245 runs.