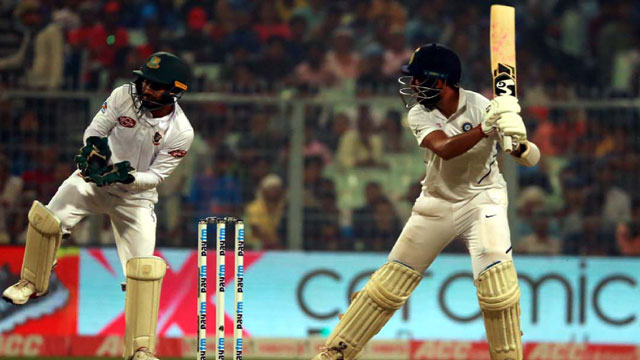 India took charge of the second Test of the series straightway at the packed Eden Gardens on Friday after bowling out Bangladesh for 106 in 30.3 overs on the first day of the pink-ball Test.

None of the current Bangladeshi players played a pink-ball match before. Mominul Haque, the stand-in captain of Test team, hinted that that they might have to face a tough challenge while facing the Indian pace-bowling attack with the pink ball.

But he opted for batting after winning the toss and Bangladeshi top-order crumbled in no time.

Bangladesh lost their first wicket when Imrul Kayes failed to judge the right line while facing Ishant Sharma. He went for a drive to the cover area but missed the ball which hit his pads, and the umpire did not think twice before lifting his finger. Imrul went for a review but in vain.

Tigers lost four more wickets within 26 runs as Mominul Haque, Mohammad Mithun and Mushfiqur Rahim failed to add anything to their name, and as a result, Bangladesh suffered a colossal batting collapse. These three batsmen played 13 balls together.

After a crumbling start, the onus was on Mahmudullah Riyad and Liton Das. But Mahmudllah fell prey to Ishant thanks to a stunning catch by Wriddhiman Saha behind the wicket Liton retired hurt after sustaining a blow on his head off Mohammad Shami.

Liton sustained the blow at 20.3 overs. He retired six balls later. The right-handed wicket-keeper batsman did not go back in the middle. Bangladesh team management fielded Mehidy Hasan Miraz as the concussion substitute. The ICC introduced this sort of substitutes in July this year, and it is effective from August 1 this year.

Bangladesh had to make another concussion substitute when Nayeem Hasan got a blow off the same bowler- Shami. Bangladesh fielded Taijul Islam as the replacement. While Miraz is allowed only to bowl this match, Taijul can do both.

Among the Tigers, Shadman Islam hit the highest 29. Liton posted 24 (retired out) and Nayeem scored 19. None of the other Bangladeshi batsmen reached double-digit scores.

In reply, India posted 174 for three in 46 overs at the end of day-1 with Virat Kohli and Ajinkya Rahane batting at 59 and 23 respectively.

Ebadat Hossain removed Rohit Sharma (21) and Cheteshwar Pujara (55) while Al Amin Hossain took the wicket of Mayank Agarwal who had hit a double ton in the first game of the series.

India have already secured a lead of 86 runs with seven wickets in hand at the end of Day-1 of the Kolkata Test.