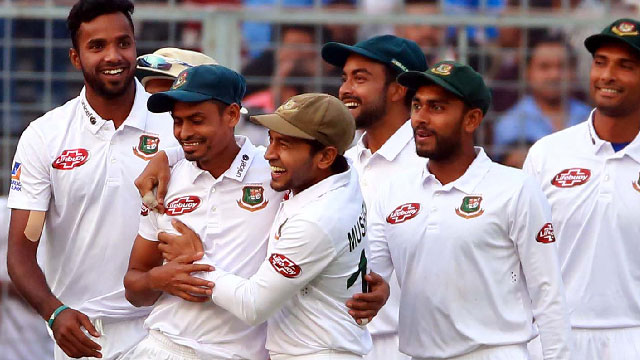 After taking a 241-run lead, India declared their first innings on 347 for 9 in 89.4 overs against Bangladesh losing their last four wickets for 42 runs in the second Test of the two-match series at Eden Gardens in Kolkata on Saturday.

Apart from him, Cheteshwar Pujara (55) and Ajinkya Rahane (51) hit fifties each.

Al Amin Hossain and Ebadat Hossain took three wickets each. They were tremendously well during the start of the evening hours of the game. Abu Jayed also bagged two wickets.

In his last few overs of the day, Al Amin made Indian lower order scared with his bouncer barrage. He scalped two of India’s last three wickets. However, the wickets were notched up by some low balls.

Resuming on their overnight total of 174 for 3 in 46 overs, India posted 289 for 4 in 76 overs at the lunch break of the day-2 with Virat and Ravindra Jadeja batting on 130 and 12 respectively. India extended the lead to 183 runs in their first innings with six wickets in hand.

Bangladesh’s only success during the first session of was the wicket of Ajinkya Rahane (51 off 69). Rahane was hunted by Taijul Islam who took the field as the concussion substitute of Nayeem Hasan who got struck on his head on day-1.

Earlier, Bangladesh tumbled for 106/10 in the first innings of the game only in 30.3 overs. None of the Bangladeshi batsmen showed any resistance against the strong pace attack of India.

Bangladesh’s decision to bat first after winning the toss came under the scrutiny as the Tigers failed once again to rule over the Indian bowling attack.

Bangladesh will have to face at least 45 overs to end the day-2.