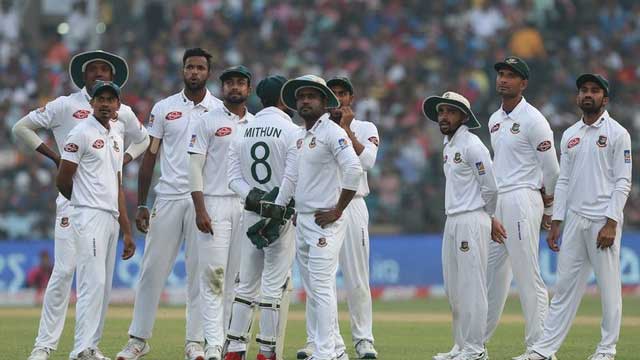 Bangladesh lost the second Test of two-match series against India by an innings and 46 runs on Sunday at the Eden Gardens in Kolkata.

It was the first day-night Test in the soil of the subcontinent and the first pink-ball Test for both participating teams as well. With the defeat in this game, India completed a clean sweep 2-0 over the cornered Tigers who have lost two of their main playing XI players- Liton Das and Nayeem Hasan- as both of them sustained blow on the head.

With this defeat, Bangladesh lost first two of their World Test Championship games, and both of those was by an innings. This dismal show raised the question over Bangladesh’s ability to fight in the toughest competition of the ICC.

Resuming their overnight total of 152 for 6 in 32.3 overs, Bangladesh tumbled for 195/10 in 41.1 overs and endured their 46th inning defeat. Mushfiqur Rahim posted 74 off 96 to become the only Bangladeshi batsman to show some resistance against the Indian bowling line-up which is one of the best in their history.

Mahmudullah Riyad scored 39 in the second innings and he was looking settled in the middle to make a big innings. But due to a hamstring blow, the right-handed batsman had to retire hurt, and never was able to return to continue to bat.

Bangladesh batted only 48 minutes and 8.4 overs in the third day before getting all-out.

Tigers were completely outplayed against the Indian pace-bowling attack. Ishant Sharma, the right-arm pacer bagged five wickets in the first innings, and UmeshYadav took another five in the second innings.

These two bowlers were the main architects of India’s seventh Test win in a row, which is now the record of most wins for India in a row. Their previous record of the most wins in a row was six back in 2013.

While Ishant and Umesh did the main job, ViratKohli was also tremendous in this game hitting his 27th Test ton. With the latest ton, Virat became the first Indian to hit a ton in pink-ball Tests.

At the end day-1, Bangladesh’s coach Russell Domingo had to face so many questions about opting to bat first after winning the toss. But he came up stating that the decision was right.

“We didn’t come here to serve the ball to India. The best way to win the game to bat first against the team like them. But yes, we failed to come up with the best effort with the bat,” Domingo told the media after the end of day-1.

Bangladesh missed the service of Shakib Al Hasan and TamimIqbal enormously in this game. While Shakib is unavailable to play any sort of cricket due to the embargo imposed on him by the ICC due to failing to report the corrupt approaches, Tamim is out of action for personal reasons.

The onus was on ImrulKayes, MominulHaque, Mushfiqur and Mahmudullah to lead the team from the front. But all of them disappointed to come up with the expected performance. While Imrul scored 4 and 5, Mominul suffered a pair in this game. This below-par performance has finally handed them a series that they will love to forget as quick as possible.

A brief score of Kolkata Test:

Result: India won the game by an innings and 46 runs.