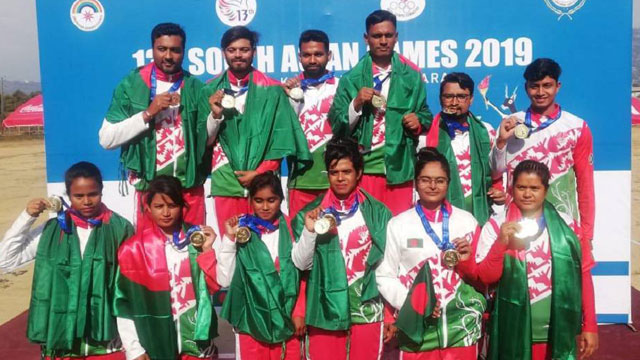 Bangladesh secured their record 19 gold medals in the ongoing 13th South Asian Games in Nepal when Bangladesh Men’s cricket team (U-23) beat Sri Lanka (U-23) by seven wickets at Kritipur, Nepal on Monday.

Bangladesh’s best performance in the SA games was winning 18 gold medals back in 2010 when Bangladesh was the host of the event.

Winning the gold for the second time in men’s cricket, Bangladesh also strengthened their best SA Games performance outside the country. In 1995, Bangladesh had won seven gold medals in Madras SA Games, which was Bangladesh’s best SA Games display abroad.

In the final of SA Games Men’s cricket, Bangladesh won the toss and opted to field first. Sri Lanka posted 122 runs all-out in 20 overs. The tremendous efforts of the Bangladeshi bowlers set the foundation to win another gold in the event.

Sri Lankan openers posted 36 runs in the first wicket stand which was indicating a big total. But before posting 100 runs on the board, Sri Lanka lost seven wickets.

Both of them bowled four overs each and conceded 16 and 18 runs respectively to take one wicket each. Along with them, left-arm slow bower Tanvir Islam scalped two wickets conceding 28 runs in four overs.

In reply, Bangladeshi openers Saif Hassan and SoumyaSarkar added 44 runs in the first wicket stand and it was enough to lay down a solid base for a big win. Soumya fell for 27 off 28 with four fours while Saif posted 33 off 30 with three fours and two sixes.

After the dismissal of the openers, captain Najmul Hossain Shanto took the responsibility to guide the team to victory. Yasir Ali also contributed scoring 19 off 16 deliveries. Shanto remained unbeaten for 35 off 28 with two fours and one six while AfifHossain also remained unbeaten for five off seven balls.