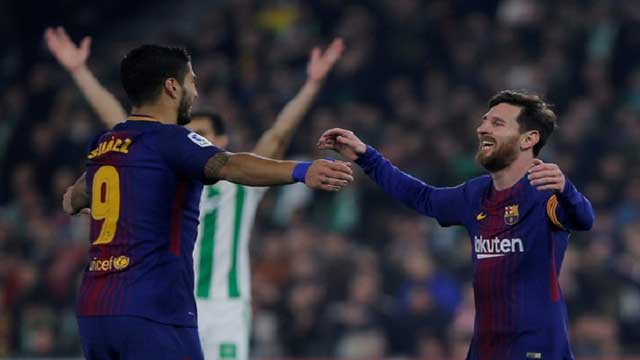 Ivan Rakitic also scored for the Catalan club, which moved 11 points ahead of Atletico Madrid at the start of La Liga's second half.

After 20 rounds, Barcelona has a 14-point lead over third-placed Valencia, and is 19 points in front of rival Real Madrid, which has a game in hand.

"There are 18 games left, that's a lot," Barcelona coach Ernesto Valverde said. "But with each win we will be taking a big step toward the title."

After an even first half at Benito Villamarin Stadium, Barcelona gained control of the match when Rakitic opened the scoring after a breakaway early in the second half. Messi scored his first goal five minutes later and Suarez quickly added to the lead.

Messi's second goal in the 80th was one to admire, with the Argentine entering the area and going past two defenders before calmly finding the net.

Suarez closed the scoring just before the end, reaching his 100th goal in 114 matches with Barcelona.

"After the first goal we were able to play more openly," Valverde said.

Barcelona was coming off a 1-0 defeat at city rival Espanyol in the quarterfinals of the Copa del Rey, a result that ended the team's 29-match unbeaten streak. It remains without a loss in the league.

Betis, which dropped to 11th place, was coming off two straight wins, one of them at city rival Sevilla.

Barcelona defender Thomas Vermaelen came off with an apparent muscle injury before halftime. He was replaced by France international Samuel Umtiti, who returned after a long injury layoff.

On Saturday, Atletico was held to a 1-1 home draw against Girona, while Valencia lost 2-1 at Las Palmas. Real Madrid routed Deportivo La Coruna 7-1 at Santiago Bernabeu Stadium on Sunday, with Cristiano Ronaldo and Gareth Bale scoring two goals each.