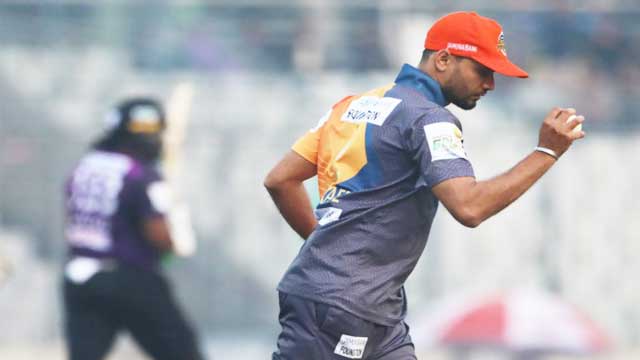 Bangladesh one-day international skipper Mashrafee bin Murtaza on Monday said that he was ready to give up the position if the Bangladesh Cricket Board wants him to do so.

‘If the BCB tells me to leave captaincy, I will leave it,’ Mashrafee told reporters in Mirpur after his team Dhaka Platoon conceded a seven-wicket defeat to Chattogram Challengers to get knocked out from the Bangladesh Premier League.

Mashrafee a few days ago left the decision of his playing international cricket both on the selectors and the cricket board but he didn’t comment anything regarding his captaincy role in the ODI team.

BCB director and media committee chairman Jalal Yunus confirmed New Age that Mashrafee is still the ODI captain of the national team as long as he is available for selection despite him withdrawing his name from the national payroll.

Mashrafee on Sunday asked the BCB to drop him from the payroll and include a young player instead in a first formal hint of resigning to his fate though he reiterated that he would continue playing the game.

‘I am enjoying playing cricket. I will play DPL this season. Those who take decisions about the national team, they will do their job. I have already spoken to Papon [Nazmul Hasan] bhai about the central contract.

‘This will happen to everyone. The superstars of today will face a similar situation in five years. This is life. Some players can leave on a high, while there are some who want to keep enjoying the game, whether it is for the national team or anywhere else,’ he added.

Mashrafee said he was not much interested to get a proper send-off despite the BCB wishing to give him a grand farewell as he recalled many former Bangladeshi cricketers did not enjoy the privilege.

‘Till yesterday, I was a nationally contracted cricketer with the cricket board. I always believe the BCB is the cricketers’ guardian. I never took pride in going against them. I thank the BCB for considering me to give me a proper send off, but I don’t have much interest in it,’ said Mashrafee.

‘I have always said that a cricketer’s entire career isn’t only about playing for the national team. I think I have the freedom to play as long as I want. I think we have had bigger cricketers who couldn’t retire from the field.

‘Habibul Bashar, who always made runs in crisis situation, didn’t get to retire while still playing. I think only [Khaled Mahmud] Sujon bhai did it, but otherwise it is a rare case. I even have thought of it at times, but it is not really required,’ he added.

‘Cricket isn’t bigger than life, but cricket is the biggest part of my life,’ he said.

Mashrafee was also hopeful to play in the next edition of BPL if any franchise picks him from the players’ draft event. The 36-year old had to wait till the fourth round to get picked by a team finally in the latest BPL.

Mashrafee showed that he has still some cricket left in him when he took a spectacular one-handed catch to dismiss Chattogram’s Chris Gayle after coming to play with 14 stitches in his injured left hand.

‘I decided to play when I had got injured itself. The catch just came my way. There was no option to put both hands, and thankfully it came slowly towards me, which helped me take it,’ he said.