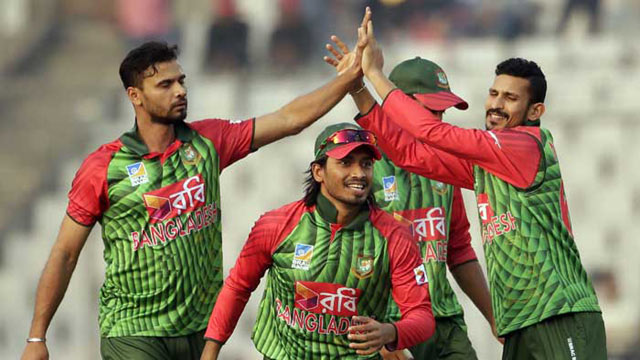 Dhaka, Jan 25 (Just News): Bangladesh will play against Sri Lanka in the 6th match of the seven-match Tri-nation series at Sher-e-Bangla National Cricket Stadium on Thursday.

The last league battle of the tournament will begin at 12pm where Sri Lanka will take the ground to utilise their must-win chance for the final berth while hosts are pressure-free maintaining the top slot in the points table with all-win 15 points from three games after confirming the final with two matches to spare.

The variation of net run rate between two bottom-run sides -- Sri Lanka (-0.989) and Zimbabwe (-1.087) is very close with having four points each, registering one win apiece. If Sri Lanka can manage a win against rocking Bangladesh, they will face each other in the final on Saturday without any further equation. In reverse result, the fate of the final berth will be decided by net run rate between Sri Lanka and Zimbabwe.

"In this kind of tournament if you lose the first two games it's always tough, but sometimes it gives you more confidence and morale to come back strong. As a team, we're looking at it that way. We will have something up our sleeves," said Sri Lanka captain Dinesh Chandimal ahead of the match day in Mirpur on Wednesday.
However, Mustafizur Rahman needs one more dismissal to complete 50 wickets in ODIs to be the sixth fastest bowler to reach the milestone alongside world famous spinner Shane Warne of Australia and New Zealand pacer Matt Henry and by a distance the fastest Bangladesh bowler.

The Tigers are unlikely to make any changes in their best eleven who routed Zimbabwe by 91 runs on Tuesday.

The Lankans wicketkeeper batsman Kusal Perera is almost certain to be unavailable from their best eleven due to a side strain. Danushka Gunathilaka is likely to come into the eleven. Asela Gunaratne's spot also looks a little shaky, though perhaps he will stave away a challenge from the newly-arrived Dhananjaya de Silva for at least one more match. A slight complaint for Nuwan Pradeep means Dushmantha Chameera also stands a chance of playing.

Bangladesh started their new year ODI campaign with this Tri-series beating Zimbabwe by eight wickets in the opener before routing Sri Lanka by a record 163-run margin and found Zimbabwe again for a 91-run win.

Sri Lanka suffered a 12-run loss against Zimbabwe to start their campaign in the series and then conceded defeat against Bangladesh before returning to the track beating Zimbabwe by five wickets.

The previous record is showing that Sri Lankans have never lost in two successive matches against Bangladesh which registered only four wins against 34 losses in their 42 ODI encounters. Two matches ended with no results.