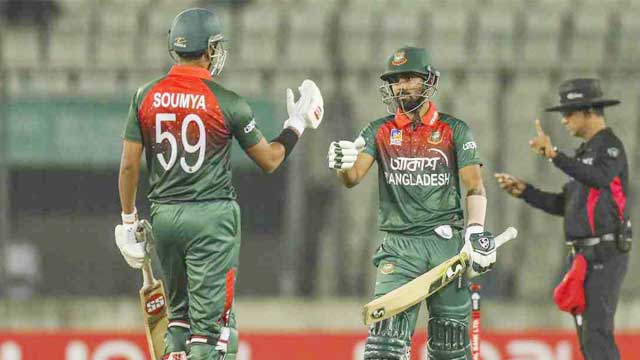 Riding on the fiery batting efforts by Liton Das and Soumya Sarkar, the high-flying Tigers outplayed Zimbabwe by 48 runs in the first match of the two-match T20I series at Sher-e-Bangla National Cricket Stadium on Monday.

Sent into bat first after losing the toss, Bangladesh posted a comfortable 200 runs.

In reply, Zimbabwe were bundled out for 152 runs in 19 overs to lose the match by 48 runs.

Zimbabwe were never in a position to offer a threat to the hosts as they lost veteran Brendan Taylor in the second over while replying to a big total of 200 runs. Shafiul Islam drew first blood removing Taylor for one from five deliveries.

The tourists lost two more wickets before posting 50 runs on the board. Craig Ervine was the second to get dismissed. He fell prey to Mustafizur Rahman for eight off nine balls with one four while Wesley Madhevere sent to the dressing room trapping into a run-out.

Eventually, Zimbabwe tumbled for 152 all-out in 19 overs as the sealed the game by 48 runs.

Earlier, Liton continued his tremendous form as he smashed a 39-ball 59 with five fours and three sixes to help Bangladesh post a challenging total of 200 for 3 in 20 overs.

Liton hit two centuries in the three-match ODI series against Zimbabwe and earned the man of the series award. Now, he managed to bring his golden form in T20Is as well. Along with him, Soumya Sarkar struck 32-ball 62 with four fours and five sixes to help the Tigers post a big total.

Zimbabwe won the toss and sent Bangladesh to bat first. Liton Das and Tamim Iqbal posted 92 runs in the first wicket stand before Tamim fell prey to Wesley Madhevere for 41 off 33 balls with three fours and two sixes.

After Tamim’s departure, Liton and Soumya Sarkar added only 14 runs in the second wicket stand. Liton was removed by Sikandar Raza. The right-handed batsman expected the ball to turn away but it didn’t and hit his pad.

In the third wicket stand, Soumya and Mushfiqur Rahim added 40 runs. In the eight-ball short stay, Mushfiqur scored 17 with two sixes but he failed to continue as Chris Mpofu trapped him.

After Mushfiqur’s removal, Mahmudullah and Soumya added 54 runs on the board off 25 balls. Soumya remained unbeaten on 62 scoring 20 runs in the last over smashing three big sixes.

Raza, Mpofu and Wesley Madhevery scalped one wicket each in this game.

The second and final game of the series will take place on March 11 at the same venue.