Ashraful not auctioning his bat 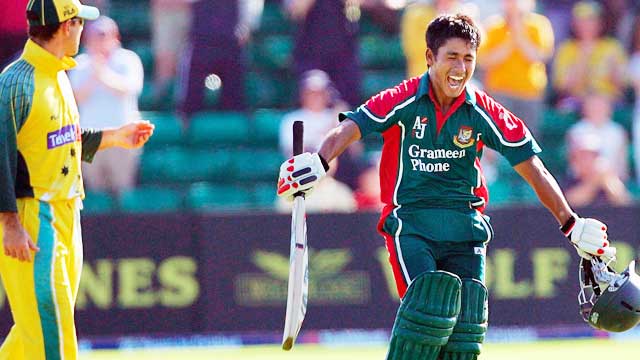 Former Bangladesh captain Mohammad Ashraful's historic bat is not going under the hammer as the cricketer says the procedure of auction is not clear to him.

Ashraful had announced to put the bat he used to hit his first ODI ton in 2005 against Australia in England on auction to raise money for people severely affected by coronavirus pandemic.

“I saw there are many fake bidding for the bat of Mushfiqur (Rahim). If anything happens like that, then there's no meaning in putting a bat on auction. I actually don’t understand how auction works in Bangladesh. I don’t think we have a good culture of the auction in the country,” Ashraful told the media.

“I wanted to put this bat on auction so that we can arrange a good amount of money for the people. But now I think we should have a good process for auction,” he added.

Sources say the former Bangladesh captain wanted to set a base price of Tk 15 lakh. But Auction 4 Action, who wanted to organise the bidding, declined to accept this price, leading to Ashraful's change of mind.

“What will the auction mean if we don’t get a good amount of money? I can help people from my personal fund. I wanted to put the bat on the action for a good amount so that we can help more people who are suffering from the pandemic,” Ashraful said.

Earlier, Auction 4 Action organised the auction of the bat of Shakib Al Hasan, which was sold for Tk 20 lakh to a Bangladeshi living in the USA.

E-commerce company Pickaboo.com is currently organising the auction of Mushfiqur Rahim’s bat that he used to hit Bangladesh’s first double-ton in Test back in 2013 against Sri Lanka. But this auction saw some fake bidding which forced the organiser to put the process on hold for a while.