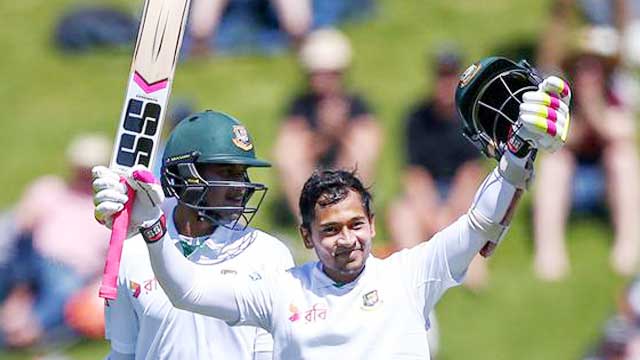 The historic bat with which Mushfiqur Rahim scored the country’s first double-century in Test cricket and recently put up for auction to raise funds for Coronavirus relief fetched a cool Tk 1.7 million (17 lakh) in an online auction Thursday night.

The buyer turned out to be the former Pakistani all-rounder Shahid Afridi, who agreed to buy it as a piece of memorabilia for his foundation at $20,000 (Tk 17 lakh approximately).

Although the auction formalities were completed on Thursday, Mushfiq announced the name of the bidder after appearing live on Facebook Friday evening.

Mushfiq put the bat, with which he scored Bangladesh’s first Test double hundred in 2013 against Sri Lanka, in auction earlier this week, but the process had to be suspended for a period due to some fake bidding, when it first went under the hammer on Tuesday.

The auctioneers-Nibco and Pickaboo.com -- claimed that most of the bidders were fake and they had bid unfeasible amounts, more than Tk 40 lakh.

The five- day auction of Mushfiq's bat, which began on May 10 , having a base price of Tk 6, lakh, was jointly operated by his management partner NIBCO, Sports for Life and Pickaboo.com.

Chief executive officer of Pickaboo.com, Moin Talukder, told that after some initial hiccups they finally got the right buyer in Shahid Afridi Foundation, who confirmed their interest through official letter.

The Shahid Afridi Foundation was initiated in 2014 by former Pakistan famed cricketer Shahid Afridi to carry out philanthropic activities in Pakistan and abroad.

This was the blade with which Mushfiqur hit his first double century in Test cricket, also becoming the first Bangladeshi to achieve the milestone, against Sri Lanka at Galle in 2013. The entire proceeds from the auction will be spent towards helping the poor and needy.

He earlier also talked about the bat being special to him. "The bat is obviously special to me. My name is attached to a piece of history because of that bat. No one else can become the first double centurion (for a country)."