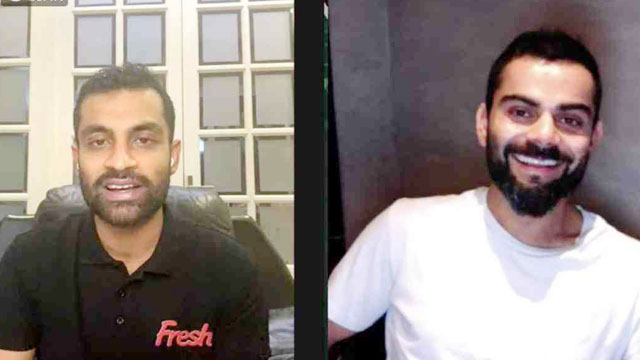 Indian captain Virat Kohli said consistency in training and diet is the key to success. He was the latest guest in the live Facebook session with Bangladesh ODI captain Tamim Iqbal. After Rohit Sharma, Virat was the second Indian cricket star to join Tamim in this show.

Virat is currently at the top of the table of the best ODI batsmen, and he is also among the top 10 batsmen in Tests and T20Is as well.

“It’s a slow process. It was needed to take much time to control everything. We have to be patient, and I think the world will never the same. Many things will be changed in the coming days. We have to follow the rules respectfully that the authorities are telling to do. We cannot take it lightly,” Virat said.

“The strong thing is when our people see someone is struggling with something everyone comes up to help. I agree that both countries have many poor people, and we have to help them. We need to take care of our migrant labourers, who are not getting foods and basic needs. The government is now providing them with permission to travel to their native home,” Virat added.

Tamim reminded Virat that he was a different batsman during his early days in international cricket in 2009. But in the next two-three years, he developed a lot.

“When someone comes to play international cricket, he thinks how to go for a good career, sometimes he doubts himself. I was out of the team after a few matches at the start of my career. I got another opportunity in 2009. My confidence had started to build up right then. When I had hit the first century against Sri Lanka I started to believe that I can do it for a longer period of time,” Virat told.

The number-one batsman insisted that mindset is the main thing what can guide a batsman to a good phase of his career. He said no batsmen should think about his opponents much. Instead of doing so, everyone should set up a good mindset for a better result.

“You will have to believe that you can win this game for your team. It doesn’t matter how many matches you have played before. I always think this way. If someone gets out who is more experienced than me, I don’t think that’s how I can do it for my team. I always see it as an opportunity. If someone fails I think I can do it. I can always believe that I can win the game for my team,” Virat further added.

Tamim is not a big fan of training much before the match day. He believes to go and play his game. Virat also came up with the same idea. He said if a batsman maintains consistency in his training and diet and if he feels fit to play, he should go and play in the match day.

“If you keep consistency in your training and diet, and you feel fit and better you can go to the field and be at your best every time. If I get satisfied during a practice session I don’t stay at the net. I never overdo after getting enough practice time,” Virat added.

Tamim will go live on Monday again, and this time, three former Bangladesh captains- Minhajul Abedin, Akram Khan and Khaled Masud Pilot will join him. Along with them, Pakistan legend Wasim Akram will also join them as the special guest.