US for permanent solutions to Rohingya crisis 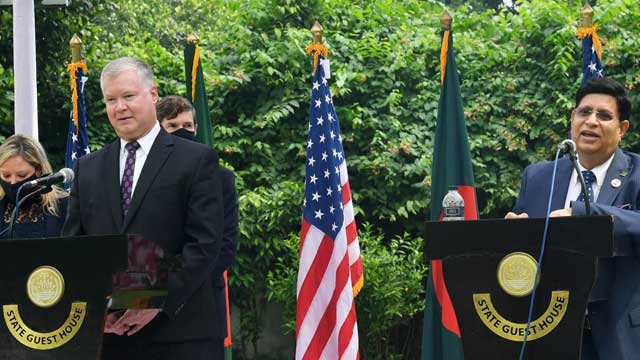 The United States stressed the need for permanent solutions to Rohingya crisis while addressing underlying issues of the problem, US deputy secretary of state Stephen E Biegun said at a press briefing in Dhaka on Thursday.

Stephen said this after a meeting with foreign minister AK Abdul Momen at the State Guest House Padma in the capital.

Momen said that he sought support of the US for a sustainable solution of Rohingya crisis confirming repatriation of over a million displaced Rohingya people to Myanmar.

The two sides also discussed about the repatriation of Rashed Chowdhury, one of the convicts in the case involving assassination of Bangladesh’s founding president Sheikh Mujibur Rahman, to Bangladesh from the US, among other issues.

Foreign secretary Masud Bin Momen and US ambassador Earl Miller were, among others, were present in the meeting.

Stephen reached Dhaka from New Delhi on Wednesday as a part of his six-day official visit to India and Bangladesh starting from October 12 to October 16.