PM to US Deputy Secretary of State 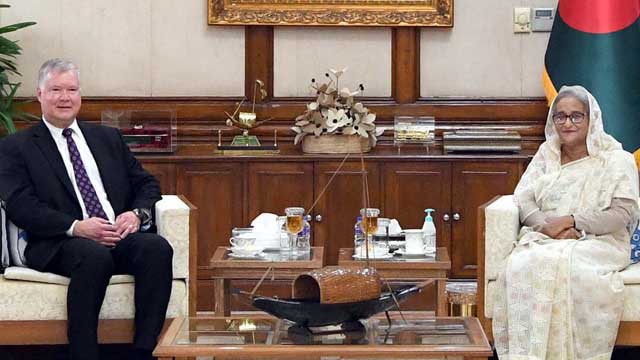 Prime Minister Sheikh Hasina today renewed her call to the international community, including the United States, to help Bangladesh rehabilitate Rohingyas in their homeland, Myanmar.

She also put emphasis on immediate repatriation of them and said Myanmar should take their citizens back.

"We want immediate repatriation of the Rohingyas and the world community, including the United States, should help rehabilitate them in their homeland of Myanmar," she said.

The Prime Minister said this while visiting US Deputy Secretary of State Stephen E Beigun paid a courtesy call on her at her official residence Gono Bhaban.

Quoting Beigun, he said the United States also wants a permanent solution to the protracted Rohingya crisis. "We'll continue to extend our support to Bangladesh on this issue," Karim quoted Beigun as saying.

The Prime Minister mentioned that over 1.1 million forcibly displaced Rohingya nationals are living in Bangladesh at the moment, which is an extra burden on the country.

"The problem has been created by Myanmar and we're holding dialogue with them ... they should take their citizens back," she said.

Sheikh Hasina said the Rohingya issue is a social problem, and a large number of the displaced Myanmar nationals are living at camps in Cox's Bazar.

"Some quarters could mislead them to be involved in anti-social activities. So, we need their immediate repatriation to their homeland," she said.

The Prime Minister and the US Deputy Secretary of State discussed the issue of bringing back Bangabandhu's convicted fugitive killer Rashed Chowdhury, who is now hiding in the USA.

Beigun informed that the case is being reviewed by the US attorney general's office.

He said the visa services for Bangladeshis students will be reopened once the Covid-19 situation eases.

The US deputy secretary of state, who arrived in Bangladesh on Wednesday, said he has already discussed the issue of economic cooperation with Bangladesh officials.

"The US government will closely work with Bangladesh for promoting economic and trade relations," he said.

He discussed with the Prime Minister the coronavirus situation in the USA, saying that over two lakh people have died there after being infected with the deadly virus. "We're close to making vaccines available and hopefully those will be available in the market in the next two weeks," he said.

According to him, several US companies are manufacturing the vaccines as widespread vaccination will start from next year.

The US Deputy Secretary of State highly appreciated Bangladesh's tremendous economic stability and progress under the leadership of Prime Minister Sheikh Hasina.

He said Bangladesh is attracting foreign investment in huge volume, mentioning that the United States wants to further strengthen cooperation with Bangladesh in the energy sector.

The Prime Minister said her government is setting up 100 special economic zones across the country to attract more investment from home and abroad as well as generate employment.

Sheikh Hasina also briefly highlighted her government's steps to contain the Covid-19 alongside keeping the wheels of the country's economy moving amid the pandemic.

US Ambassador in Dhaka Earl R Miller and PM's Principal Secretary Dr Ahmad Kaikaus were present during the meeting.