Rebuilding morale and trust is a crucial priority for Blinken 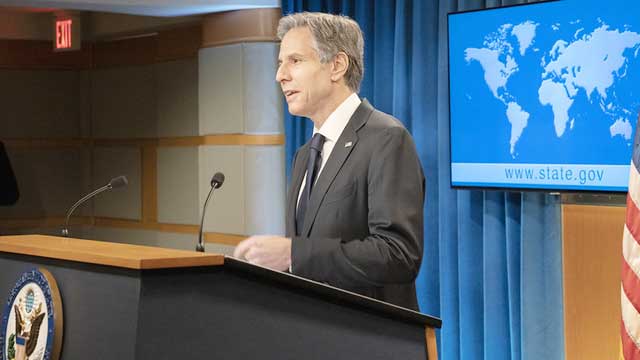 Secretary of State Antony Blinken on his first full day in the job said a crucial priority for him as secretary of state is rebuilding morale and trust. He vowed to rebuild the ranks of the foreign service and rely on its expertise as the Biden administration tries to restore U.S. global standing.

He said the world is watching how America pursues foreign policy after Trump's "America First” doctrine that alienated many U.S. allies.

Appearing in the press briefing room on Wednesday Blinken pledged to respect and be accessible to journalists and to restore the State Department's daily press briefings beginning next week.

On policy matters, Blinken said he was particularly concerned by the “foreign terrorist organization” designation for the Iran-backed Houthis that former Secretary of State Mike Pompeo announced just 10 days before the end of the Trump administration. Many fear that move, which comes with strict U.S. sanctions, will unnecessarily exacerbate what is already one of the world's worst humanitarian crises.

Blinken acknowledged the unprecedented times the nation is experiencing, as those who were before him in-person were wearing masks and the department's headquarters in Foggy Bottom was surrounded by barricades, a sign of the threats of violence that prompted heightened security in downtown Washington.

He also vowed to "invest significantly in building a diverse and inclusive State Department," seek out dissenting views and listen to experts, "because that's how the best decisions are made."

He addressed reporters and took questions later in the afternoon, with a pledge to resume daily briefings by the State Department spokesperson. Before entering the briefing room the new Secretary of State addressed to the State Department employees. He was received with a warm welcome by his former colleagues. Many of them were very enthusiastic to see him in the building. Because of the Coronavirus the welcoming ceremony was limited.

"The world is watching us intently right now," Blinken said.

"They want to know if we can heal our nation. They want to see whether we will lead with the power of our example and if we will put a premium on diplomacy with our allies and partners to meet the great challenges of our time — like the pandemic, climate change, the economic crisis, threats to democracies, fights for racial justice and the danger to our security and global stability posed by our rivals and adversaries."

He said, "As Deputy Secretary of State, I learned what it means to help lead an institution as vital as this one – how to safeguard what makes it great, invest in its future, and leave it just a little bit stronger than when you found it. I take that work very seriously. As Secretary, I will not let you down."

"To all the State Department personnel worldwide, to the men and women of USAID whose work exemplifies America at its best, I want you to know how proud I am of every single one of you and how proud I am to be on your team."

"We’ve never been in a moment quite like this before. The President is committed to getting us through it as quickly as possible, so that very soon, we can all gather in person again and have confidence that the foundations of our democracy are strong. We at State have a role to play in all of this, and I believe it starts with rebuilding morale and trust. This is a priority for me, because we need a strong department for the United States to be strong in the world."

Blinken, a 58-year-old longtime Biden confidant, was confirmed to be the 71st secretary of state by the Senate on Tuesday in a 78-22 vote. The position is the most senior Cabinet post, with the secretary fourth in the line of presidential succession. A former deputy secretary of state in the Obama administration, Blinken pledged that U.S. leadership is back.

"America's leadership is needed around the world, and we will provide it, because the world is far more likely to solve problems and meet challenges when the United States is there," he said. "America at its best still has a greater capacity than any other country on earth to mobilize others for the greater good."

Shortly after being sworn in late Tuesday, Blinken hit the ground running, making his first series of calls to foreign minister counterparts in neighbors and allied countries: Canada, Mexico, Japan and South Korea.