US condemns violence against peaceful protesters in Sri Lanka 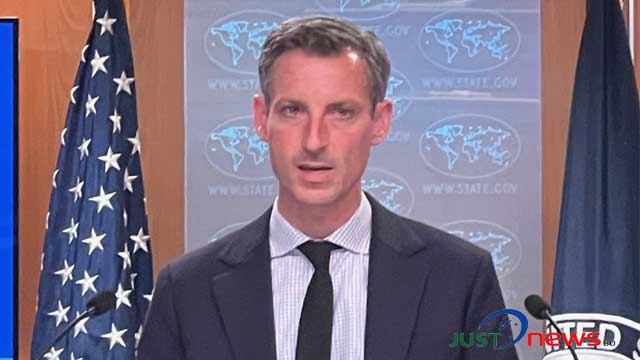 US Department of State spokesperson Ned Price has said the US is closely following the ongoing developments in Sri Lanka, including the resignation of the prime minister.

He made the comment in reply to a question on Sri Lanka’s ongoing violence at a regular briefing at the US Department of State on Monday.

In the briefing, State Department Correspondent Mushfiqul Fazal asked, “Sri Lankan Prime Minister Mahinda Rajapaksa has resigned aimed mass protest, five people have died and more than 190 injured in violent in the capital. The island nation is facing its worst economic crisis since its independence. So what is your comment on Sri Lankan current situation ?”

In reply, Ned Price said, “We’re closely following the ongoing developments in Sri Lanka, including the resignation of the prime minister. We urge the government to work quickly to identify and implement solutions to achieve long-term economic stability and address the Sri Lankan people’s discontent over the worsening economic conditions, including power, food, and medicine shortages as well.”

The US Department of State spokesperson said, “We condemn violence against peaceful protesters, and call for a full investigation, arrests and prosecutions of anyone involved. We are also concerned with the state of emergency declarations which can be used to curb dissent. So we’re continuing to watch this very closely.”