Bangladesh yet to meet basic anti-trafficking standard: US report 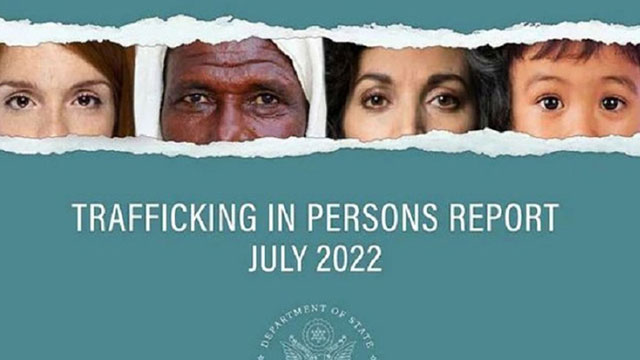 The State Department of the United States in their 2022 trafficking in persons report has ranked Bangladesh on Tier-2 saying that the government of the country is yet to ‘fully meet’ the minimum standards for the elimination of trafficking.

In the 22nd annual report released on Tuesday, the State Department, however, said that the Bangladesh government demonstrated an increasing effort compared with the previous reporting period, considering the impact of the Covid-19 pandemic on its anti-trafficking capacity.

It stated that these efforts included increasing investigations, prosecutions, and convictions against human traffickers, including upholding the dismissal of a parliamentarian involved in a labour trafficking case.

The TIP 2022 has made 18 recommendations including strengthening the capacity of anti-trafficking tribunal personnel to prosecute and adjudicate human trafficking cases and expanding tribunals to heavy caseload areas to improve services for trafficking victims.

It also called for enhancing training for officials, including law enforcers, labour inspectors, immigration officers, and health care providers, on the identification of trafficking cases and victim referrals to services.

Asked, home minister Asaduzzaman Khan declined to comment before going into details of the report.

This year, the US embassy in Dhaka congratulated Mohammed Tariqul Islam, the country director of the Bangladesh branch of the non-governmental organisation Justice and Care, for his selection as one of the 2022 TIP Report Heros.

‘Observers alleged some officials from district employment and manpower offices facilitated human trafficking and some traffickers in rural areas had political connections that enabled them to operate with impunity,’ the report stated.

Other observers reported some police conducted slow and flawed investigations to allow traffickers to evade punishment, including when suspects were fellow officers,’ it added.

The report stated that allegations of government corruption included officials working near international border crossings and police accepting bribes to release victims to their traffickers.

In registered brothels, some police charge bribes to ignore abuse within the establishments, to forego checking for the required documentation that each individual was older than 18, and to procure fraudulent documents for girls as young as 10 years old.

‘Because a number of government officials, including parliamentarians, maintained close ties to foreign employment agencies, there were concerns such officials had conflicts of interest in approving migrant-friendly practices, such as allowing for the prosecution of abusive recruitment agencies and increasing protections for a migrant worker,’ the report stated.

The US report said that the government did not uniformly employ standard operating procedures to identify trafficking victims among vulnerable populations, resulting in the penalisation of some returning migrant workers and potential sex trafficking victims.

Police and prosecutors often did not collaborate well with one another during the law enforcement process, which led to delays and the formation of weak cases for prosecution, the report stated.

In cross-border cases, it said that Bangladeshi officials often did not travel abroad to collect evidence and did not know how to request international evidence.

However, the report added that Bangladesh police and prosecutors of the Anti-Human Trafficking Tribunals cooperated on transnational cases with agencies in Australia, Canada, India, and South Africa.

It said that the Bangladesh government did not sufficiently investigate and prosecute trafficking cases involving the exploitation of Rohingyas.

The report stated that the government identified 1,138 potential trafficking victims, a significant decrease from 6,866 in the previous reporting period.

The report, however, said that the government did not report details of this number and, in the past, had included smuggled migrants in the overall number.

It said that traffickers continue to exploit adults and children from all regions of the country in Bangladesh’s legal brothels, many illegal brothels, and private hotels.

The US report read traffickers use false promises of work to lure poor women and children into sex trafficking and fabricate exorbitant debts the women and girls as young as 10 must repay.

‘One organisation estimated that 30,000 girls are sexually exploited in Bangladesh. Experts estimate that 20,000 children are both growing up in and exploited in commercial sex in Bangladeshi brothels,’ it said.

The US government called for increasing prosecutions and sought convictions for trafficking crimes, particularly of labour traffickers and complicit government officials.

It also called for increasing investigations and prosecutions of credible allegations of trafficking of Rohingyas, including cases that do not involve movement.