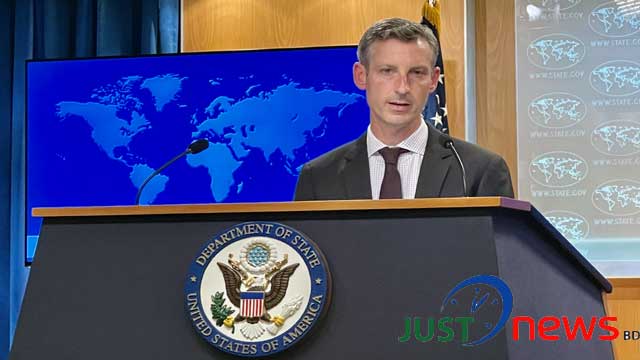 Based on credible information implicating Rapid Action Battalion (RAB) in gross violations of human rights, the US ceased all kinds of assistance to the elite force in 2018, said State Department spokesperson Ned Price on Wednesday.

“We ceased our assistance to this elite force four years ago, and in fact, in December, 2021, we sanctioned the RAB as well as six current and former officers under what’s known as our Global Magnitsky sanctions regime in connection with RAB’s involvement in serious and gross human rights abuse. We publicly designated two former RAB officials under a separate authority, 7031(c), for their involvement in gross violations of human rights,” said Ned Price while addressing at a press briefing held at State Department.

He made the remarks in reply to a question on Bangladesh authoritarian Prime Minister Sheikh Hasina’s criticism over the country’s sanction against RAB and its officials. Sheikh Hasina recently has said, the RAB was formed at the recommendation of the USA. The USA provides them (its personnel) with everything including training, arms, helicopter, and even digital system and ICT system. “When the USA imposes sanctions, raises any word or allegation, I would like to say one word that they (RAB) have conducted their activities as per the training they received,” she said.

Mentioning that the US always emphasizes human rights at the center of their foreign policy, the spokesperson of the State Department said, “Whether it is in Bangladesh, whether it’s anywhere else in South Asia or anywhere else around the world, we have placed human rights at the center of our foreign policy. And we are committed likewise to drawing attention to and putting a spotlight on those who are responsible for human rights violations when they occur.”

Ned Price further said, “These sanctions and these visa restrictions aim to promote accountability and reform for the RAB and to deter human rights abuse globally. And just as we hold these actors accountable, we’ll continue to partner with countries to develop their own capacity to fight crime, to administer justice, and to safeguard the rule of law. Our training to Bangladesh security forces promotes these very principles.”

About crackdown on opposition and freedom of expression in Bangladesh, Ned Price said, “Our comment when it comes to any attack on those who are exercising the universal right to freedom of assembly, to freedom of expression, is the same.”People everywhere, people anywhere have every right to use their voice, to assemble peacefully, to make their aspirations known in a way that is peaceful and respects the rule of law, he added.