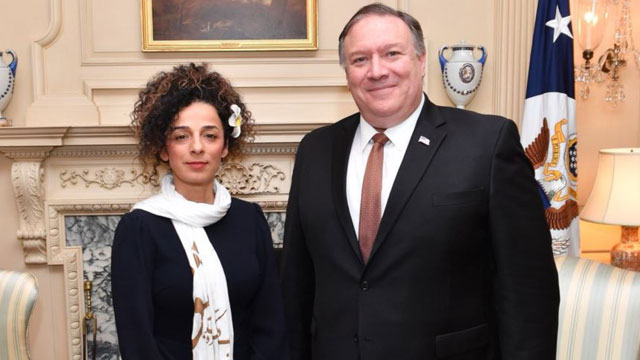 Secretary of State Michael R. Pompeo met with Iranian women’s rights activist, journalist, and author, Masih Alinejad. Ms. Alinejad is the founder of the My Stealthy Freedom campaign, which initiated the White Wednesdays campaign, both of which work to promote freedom of expression and counter the compulsory hijab laws in Iran, with more than three million followers on social media, said a press release issued by US Department of State.

In February 2018, the Iranian regime forcefully cracked down on brave Iranian women and men protesting the country’s mandatory hijab law. At least 29 women were arrested, some suffering physical harm and injury at the hands of Iran’s brutal intelligence and law enforcement officials. Many women were forced to flee the country, while others were imprisoned and sentenced for up to 20 years.

In the meeting today, the Secretary thanked Ms. Alinejad for her bravery and continued dedication to speaking out on these issues and defending human rights in Iran. The Secretary underscored the United States’ commitment to help amplify the voices of the Iranian people and to condemn the Iranian regime for its ongoing human rights abuses. The United States calls upon the international community to join us in condemning the Iranian regime for suppressing its own people.