US pulls non-emergency staff from Iraq as Iran tensions mount 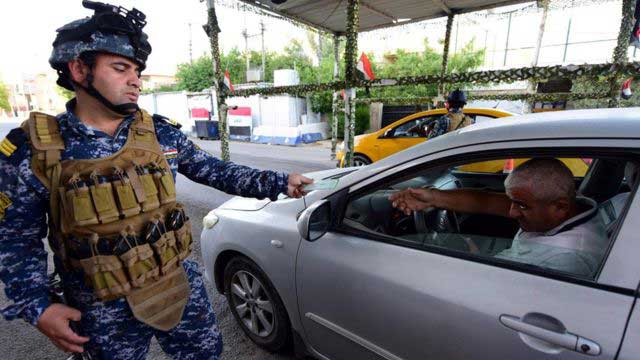 The US state department has ordered the departure of "non-emergency employees" from Iraq, amid rising tensions between the US and Iraq's neighbour Iran.

Staff at the embassy in Baghdad and the consulate in Irbil must leave as soon as possible on commercial transport.

The US military said on Tuesday that the threat level in the Middle East had been raised in response to intelligence about Iran-backed forces in the region.

It contradicted a British general who had said there was "no increased threat".

Chris Ghika, deputy commander of the global coalition against the Islamic State group, had told reporters that measures in place to protect US forces and their allies from Iran-backed militias in Iraq and Syria were "completely satisfactory".

Why is the US evacuating staff?

A state department spokesman said: "Ensuring the safety of US government personnel and citizens is our highest priority and we are confident in the Iraqi security services' [ability] to protect us.

"But this threat is serious and we want to reduce the risk of harm."

The US military's Central Command also talked of "identified credible threats available to intelligence from US and allies" when it publicly disputed Gen Ghika's comments in a Pentagon briefing on Tuesday.

"As a result OIR is now at a high level of alert as we continue to closely monitor credible and possibly imminent threats to US forces in Iraq," he added.

The UK Ministry of Defence stressed that Gen Ghika's "sole focus" was the enduring defeat of IS, and that he had made clear there were a range of threats to forces in the region that required very robust protection measures.

Germany's defence ministry said on Wednesday that the German army had suspended its training programmes in Iraq.

A spokesman said the ministry had received indications of potential attacks supported by Iran, but that there was no specific threat to the 160 German troops involved in the training operation.