Pompeo arrives in Israel for talks on Iran, annexation plans 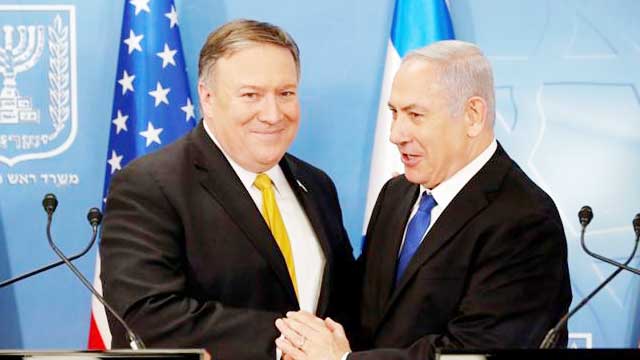 Netanyahu and Gantz postponed the swearing in of the new government to accommodate Pompeo's one-day visit [File: Press pool via Reuters]

US Secretary of State Mike Pompeo has arrived in Israel for talks with the country's Prime Minister Benjamin Netanyahu and former rival Benny Gantz who is now part of Israel's new unity government that will be formed.

Pompeo wore a red, white and blue face mask when he landed at Ben Gurion Airport near Tel Aviv on Wednesday morning for his first trip abroad in nearly two months amid the coronavirus pandemic.

During his visit, Pompeo is expected to discuss Iran, the coronavirus and Israel's possible annexation of parts of the occupied West Bank, a move expected to enrage the Palestinians and many of Israel's Western allies.

Netanyahu and Gantz postponed the swearing in of the new government to accommodate Pompeo's one-day visit.

After battling to a deadlock in three inconclusive elections over the past year, Netanyahu and the former army chief, Gantz, agreed last month to form a joint government.

Netanyahu, a right winger in power since 2009, will serve as premier for 18 months with Gantz taking on the role for the same duration.

Unveiled in January, the controversial plan gives a green light from Washington for Israel to annex Jewish settlements and other strategic occupied West Bank territory.

The Palestinians have rejected Trump's plan and cut ties with the Trump administration in 2017 over its pro-Israel stance.

Their chief negotiator Saeb Erekat said Pompeo's team had not reached out ahead of the visit.

"The Trump administration is collaborating with Israel in its annexation plan in what is both an attempt at burying the rights of the Palestinian people as well as a blatant attack on a rules-based international system," he said.

The annexation plans also drew criticism from across the Arab world.

Earlier this week, the United Arab Emirates, which has close, covert relations with Israel, voiced its "deep concern", while the Arab League has said annexation would be a "war crime".

Israel has controlled the West Bank since seizing it in the Six-Day War of 1967.

For the Palestinians and much of the international community, Israeli annexations would sink any hope of a two-state solution to the conflict.

The US plan recognises Jerusalem as Israel's undivided capital, defying Palestinian leadership aspirations that the eastern part of the city will serve as their future capital.-Al Jazeera