Bangladesh flood may be longest since 1988, says UN body 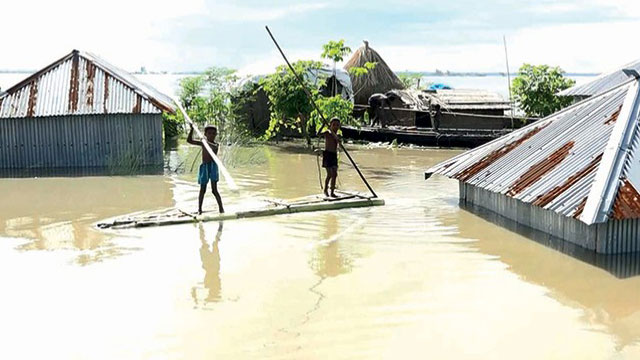 Flooding in Bangladesh may be the longest since 1988 according to forecasts and continue in the county, according to United Nations Office for the Coordination of Humanitarian Affairs.

The situation is still evolving, and it is unlikely that the water will start receding before next month, the OCHA said in its daily briefing on Tuesday.

As of Tuesday, more than 2.4 million people had been impacted across 18 districts, including 56,000 people displaced and taking refuge in government shelters.

At least 54 people had reportedly died to date as a result, it said. Bangladesh Health Emergency Operations Control room, however, said at least 81 people died in the current flooding since June 30.

Nearly 550,000 homes had been inundated and flood protection infrastructure such as embankments and dams had been damaged, said the UN body.

This anticipatory funding had since July 11allowed partners to reach communities early with key assistance, including the distribution of sealable drums to protect agricultural equipment, and hygiene, dignity and health kits, as well as cash assistance.

Flood response and recovery efforts were further complicated as they took place concurrently with the ongoing recovery response to Cyclone Amphan, as well as in the COVID-19 pandemic context,’ it said