UN chief calls for political will to achieve SDGs 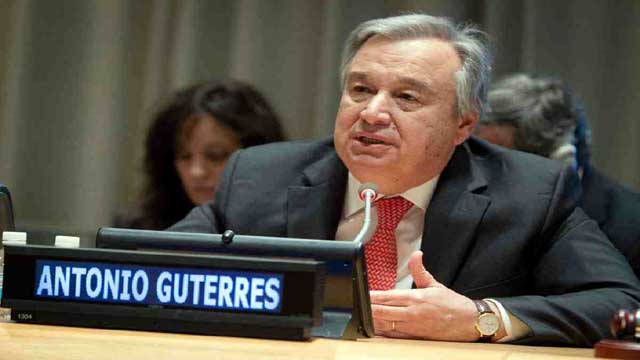 Public appetite for transformative change is growing, he said in his opening remarks at the SDG Moment 2020 on Friday.

"But one critical ingredient is still missing: political will. Without it, neither public appetite nor stakeholder action will be sufficient."

The SDG Moment, a high-level event to galvanize global efforts toward the SDGs, will be convened by the UN secretary-general annually till 2030 to match the Decade of Action for the SDGs.

"The science is clear. The people are clear. This is no time to procrastinate. The decisions taken over the next few months and years will have an enormous impact on where we will be by 2030," Guterres said.

He called for action in three crucial areas: finance, COVID-19 recovery, and ambition.

"For the SDGs to stand a chance, we must address the immediate, medium- and longer-term financing challenges that developing countries face."

He encouraged world leaders, who will meet later this month on financing for development on the sidelines of the General Assembly General Debate, to consider policy options, including boosting the resources available to international financial institutions and extending the Debt Service Suspension Initiative to at least the end of 2021.

Inclusive and green COVID-19 recovery plans, done right, can help countries to transition to a more inclusive, equitable and sustainable economy, he said.

He called for ambition and solidarity to provide the 35 billion extra U.S. dollars needed so that COVID-19 vaccines and treatments are available to everyone, fast; ambition to cut carbon emissions by half in the next decade, paving the way to carbon neutrality by 2050; and ambition to protect biodiversity, achieve gender equality, end poverty and hunger and fulfill the promise of the SDGs.

The SDG Moment aims to show that transformation is possible and is happening right now -- in so many places, with so many innovations, and with the engagement of so many people, said Guterres.

"This annual SDG Moment is an opportunity to demonstrate that, as one united family of nations, we have what it takes to eradicate poverty and hunger, tackle climate change, deliver gender equality and achieve all 17 global goals."

The world can make tremendous progress over the coming decade, especially for the most vulnerable and the poorest of the poor, he said. "When the public appetite for change is matched with political will and smart policy choices, rapid progress is unstoppable."

A world ‘shaken to the core’

He noted that the task is daunting as the foundations of the world have been shaken to the core by COVID-19.

The pandemic has pushed the world toward the worst recession in decades, with terrible consequences for the most vulnerable. Societies and citizens are reeling from widespread disruption. After many years of progress, poverty and hunger are on the rise. Children are suffering from a lack of schooling. Debt is skyrocketing. Fiscal resources are plunging, he said.

Even before the virus, inequalities were growing. The benefits of globalization and growth had failed to reach millions upon millions of destitute people, deepening their already profound despair. Biodiversity was also disappearing. Greenhouse gases were at record levels, he noted. "We need a path that brings health to all, revives economies, brings people in from the margins of society and builds long-term resilience, sustainability, opportunity and peace."

That path exists, he said. The 2030 Agenda for Sustainable Development is designed to address the very fragilities and shortcomings that the pandemic has exposed. At its heart is a simple promise: to end poverty and leave no one behind.