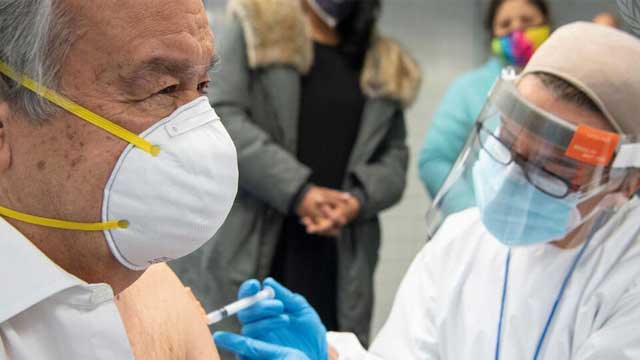 United Nations (UN) Secretary-General Antonio Guterres received his first dose of a COVID-19 vaccine here on Thursday, according to a report published on the UN official website.

The UN chief said on Twitter that he was fortunate and grateful to get the shot, and urged the international community to ensure that vaccines become available to everyone on an equitable basis.

The 71-year-old UN secretary-general was eligible to receive the vaccine on the basis of his age: New York residents over the age of 65 are included in the current phase of vaccinations in the city, which also includes school workers, first responders, public transit workers and grocery workers, said the report.

He received the jab at Adlai E. Stevenson High School in the Bronx, a few miles uptown from the UN headquarters in New York, it said.

In December, Guterres declared that he would happily receive a vaccine in public, adding that vaccination is a moral obligation for him.

Media were invited to observe the UN chief receiving his shot at a time when many countries are seeing a significant proportion of their citizens expressing “vaccine hesitancy.”

UN regional offices have noted a significant level of mistrust, said the report, adding that in some countries, around half the population are reportedly unsure about getting a COVID-19 vaccine at this stage.

The report quoted Penny Abeywardena, New York City’s commissioner for international affairs, as saying she was heartened that Guterres secured his appointment online, and received the vaccine in a public school, in the same manner as many other city residents.

“This will go a long way in building trust in our communities that the vaccine is safe for all,” she said.-Xinhua