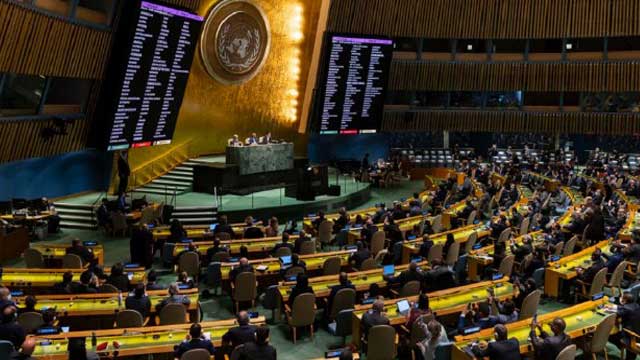 The United Nations General Assembly on Wednesday overwhelmingly adopted a resolution that demanded Russia to stop aggression on Ukraine and immediately withdraw from the country, in a powerful rebuke of Moscow’s Ukraine invasion by the global body charged with peace and security.

After more than two days of extraordinary debate, 141 out of 193 member states voted for the non-binding resolution, according to Agence France-Presse.

The United States, United Kingdom, Australia, Brazil, Saudi Arabia, Afghanistan and most of the European countries supported the resolution.

Bangladesh, China, Cuba, India, Iran, Iraq, Namibia, Pakistan, Senegal, South Africa, Sri Lanka, Uganda, Vietnam and Zimbabwe were among the 35 countries which abstained in the vote, while five members – Russia, Belarus, North Korea, Eritrea and Syria— voted against it, according to UN documents.

The resolution deplored the Ukraine invasion ‘in the strongest terms’ and condemned president Vladimir Putin’s decision to put his nuclear forces on alert.

Participating in the debate on Tuesday, Bangladesh emphasised the need for maintaining respect for sovereignty and territorial integrity of Ukraine in line with the obligations stipulated in the UN charter.

Bangladesh deputy permanent representative to the United States in New York Md Monwar Hossain said this in a statement in a debate on the Ukraine situation at the UN General Assembly.

‘Bangladesh believes that the obligations stipulated in the Charter of the United Nations regarding prohibition of use of force, respect for sovereignty and territorial integrity, and peaceful settlement of international disputes must be complied with in all circumstances, without exception,’ he said.

Bangladesh also expressed grave concern at the situation in Ukraine and called for immediate cessation of the ongoing hostilities and military operations in the Ukrainian territory.

Bangladesh called for restraint by all parties and to immediately resume diplomatic efforts and dialogue in order to settle all disputes by peaceful means.