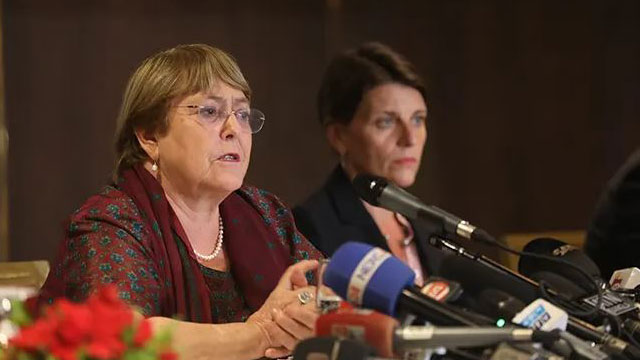 United Nations High Commissioner for Human Rights Michelle Bachelet on Wednesday said that the election period would be an important time for Bangladesh to maximise civic and political space.

She also mentioned that freedom of expression, association and peaceful assembly of political activists, human rights defenders, opposition parties and journalists are important.

‘There needs to be space for more dialogue among political parties and with a wide range of civil society actors to prevent grievances from building and erupting in social unrest,’ Bachelet told reporters at a crowded press conference at a city hotel.

She said that it was also important to ensure that law enforcement forces have the necessary training to manage protests without resorting to the excessive use of force.

Bachelet said that the voices of women, religious minorities and indigenous peoples, and especially young people needed to be heard.

She thanked the government of Bangladesh for inviting her to visit the country, the first by a High Commissioner for Human Rights.

‘I hope my visit will build on the government’s engagement with the UN’s human rights mechanisms and help deepen cooperation with us, furthering the promotion and protection of human rights in Bangladesh,’ Bachelet said.

During the visit, she met with prime minister Sheikh Hasina and several ministers - foreign, home, law, and education - and other government officials.

She also met with the National Human Rights Commission and representatives of civil society, as well as members of the diplomatic community and academics.

Bachelet interacted with students at the Bangladesh Institute of International and Strategic Studies on climate change and human rights.

She said that civil society members were important resources that governments need to tap into.

‘Critical voices can help to identify the problems, to acknowledge them, to dive deep into the causes and discuss solutions,’ she said, adding that acknowledging the challenges is always the first step to overcoming them.

‘My exchanges with civil society representatives were rich and insightful – this was not surprising as Bangladesh has historically had a wealth of civil society expertise in various fields,’ she said.

Bachelet said democratic and civic space, as well as effective checks and balances and accountability are essential as Bangladesh aims for the next levels of development.

It also contributes to decrease the risk of corruption and other hurdles to sustainable economic development and sound fiscal management, she said.

Bachelet stressed the importance of protecting minority groups, such as Hindus and indigenous peoples from violence or land encroachments.

Bachelet said that there were continued, alarming allegations of both short-term and long-term enforced disappearances, and concerns about the lack of due process and judicial safeguards.

Particularly given the long-standing frustrations at the lack of progress in investigations and other obstacles to justice, Bachelet encouraged the government to create an independent, specialised mechanism that works closely with victims, families and civil society to investigate allegations of enforced disappearances and extrajudicial killings.

‘My Office is ready to provide advice on how such a body could be designed in line with international standards,’ she said.

Inviting the UN Working Group on Enforced Disappearances to visit Bangladesh would also show a commitment to decisively address this issue, Bachelet said.

As the biggest contributor of uniformed personnel to UN peacekeeping missions, the UN chief said Bangladesh should ensure it has a robust system in place to ensure the careful human rights screening of security personnel.

Her office and the government have engaged in dialogue on review of the Digital Security Act.

‘I acknowledge the need to regulate the online space, addressing online hate speech, disinformation and combating cybercrime,’ Bachelet said, adding that addressing these concerns is not simple, as regulating communications always creates risks for the protection of freedom of expression.

She said that they had submitted their recommendations for repeal and revision of certain provisions of the Act, with a view to ensuring their compliance with international human rights laws and standards and preventing arbitrary application or misuse.

‘We look forward to the government’s feedback and timeline to expedite the review. We also discussed the importance of working closely with civil society and the UN to ensure that the new draft Data Protection Law and the OTT (Over the Top Platforms) regulations meet international human rights standards,’ she said.

Bachelet hoped that her visit would further boost Bangladesh’s engagement – government and non-governmental – with the UN Human Rights Office and mechanisms.

Bangladesh will also undertake its fourth Universal Periodic Review in the Human Rights Council next year, which will be an important moment to take stock of progress, she added.

‘It is encouraging that the new Special Rapporteur on climate change and human rights will visit the country soon. I call on the international community to support Bangladesh and other vulnerable States in their demand for effective climate action,’ Bachelet said.

For all the significant human rights challenges ahead – economic, climate-related, political, social and humanitarian – Bachelet said she is convinced that if the powerful resources within the whole society are harnessed, and policies and responses are crafted with the participation of many diverse voices, Bangladesh will continue to shine brighter in its remarkable development journey.