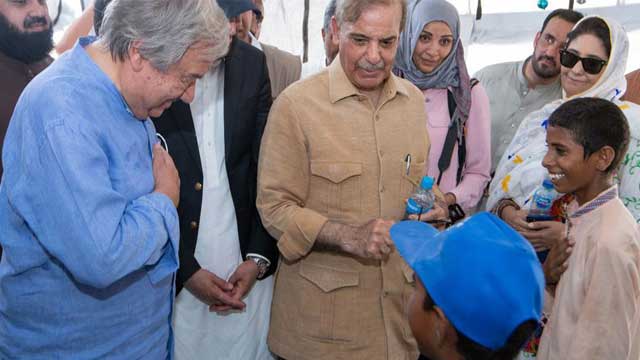 The United Nations secretary general, António Guterres, has visited several areas of Pakistan ravaged by floods, as he rounded off a two-day trip aimed at raising awareness of the disaster.

Record monsoon rains and glacier melt in the country’s northern mountains have triggered floods that have killed at least 1,391 people, sweeping away houses, roads, railway tracks, bridges, livestock and crops.

Huge areas are inundated, and hundreds of thousands of people have been forced from their homes. The government says the lives of nearly 33 million people have been disrupted. Pakistan estimates the damage at $30bn (£26bn), and both the government and Guterres have blamed the flooding on climate breakdown.

The UN secretary general landed in Sindh province on Saturday, before flying over some of the worst-affected areas en route to Balochistan, another badly hit province.

“It is difficult not to feel deeply moved to hear such detailed descriptions of tragedy,” Guterres said, after landing in Sindh, according to a video released by the office of the prime minister, Shehbaz Sharif.-The Guardian