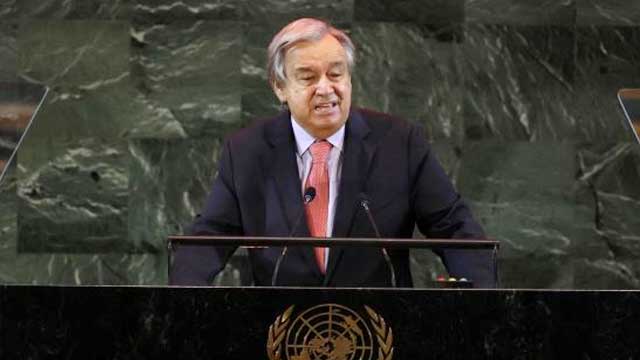 UN Secretary-General Antonio Guterres has urged wealthy nations to tax fossil fuel companies and use the proceeds to compensate for damage from climate change and provide relief over rising prices.

“Let’s tell it like it is: our world is addicted to fossil fuels. It’s time for an intervention. We need to hold fossil fuel companies and their enablers to account,” Guterres said in an address to open the UN General Assembly.

“There is another battle we must end: Our suicidal war against nature. It must be the first priority of every government and multilateral organisation. And yet climate action is being put on the back burner despite overwhelming support across the world. We have a rendezvous with climate disaster,” he added.

UN Secretary-General Antonio Guterres has warned international leaders of a looming “winter of global discontent” in a world beset by multiple crises from the Ukraine war to a warming climate.

“A winter of global discontent is on the horizon,” Guterres said as he opened the annual General Assembly at the UN headquarters in New York City.

“Trust is crumbling, inequalities are exploding, our planet is burning. People are hurting – with the most vulnerable suffering the most.”

Guterres spoke of conflicts in Afghanistan, where the economy is in ruins and human rights are being trampled. He also mentioned the fighting that has resumed in Ethiopia, and in Haiti, where gangs are “destroying the very building blocks of society”.

“In Israel and Palestine, cycles of violence under the occupation continue as prospects for peace based on a two-state solution grow ever more distant,” he said.

World leaders are gathering in New York to address the 77th session of the United Nations General Assembly (UNGA).

The war in Ukraine, climate change and nuclear disarmament are likely to dominate speeches and discussions during the annual gathering that starts on Tuesday at the UN headquarters in the United States.

The theme for this year’s UNGA is “a watershed moment: transformative solutions to interlocking challenges”.

According to the UN, it “stems from the recognition that the world is at a critical moment … due to complex and interconnected crises”.-Al Jazeera