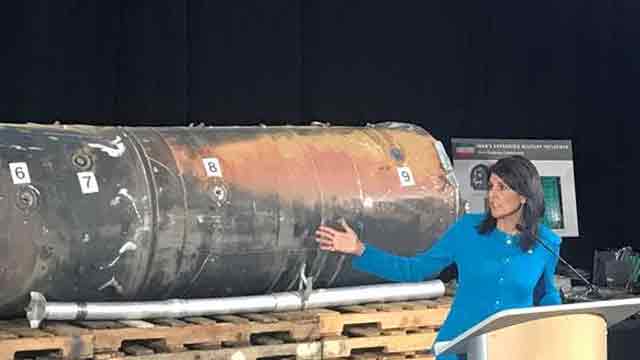 “The United States welcomes this report, as should every nation concerned about Iranian expansion. We are grateful for the depth of the UN’s inspection and analysis. Most telling, the report makes a convincing case that Iran is illegally providing the Houthi militants in Yemen with dangerous weapons. The report provides devastating evidence of missiles, conventional arms, and explosive boats of Iranian origin used by the rebels in Yemen – all of which violate UN resolutions. The United States and our partners went to great lengths to support the UN investigations into Iranian violations by declassifying evidence so that the world could better be informed of the extent of Iran’s malign activities.”

“As you know, we do not often declassify this type of military equipment recovered from these attacks. But today we are taking an extraordinary step of presenting it here in an open setting. We did this for a single, urgent purpose: because the Iranian regime cannot be allowed to engage in its lawless behavior any longer. International peace and security depends on us working together against the Iranian regime’s hostile actions.”

“The fight against Iranian aggression is the world’s fight. The United States is acting today in the spirit of transparency and international cooperation that is necessary to defeat this threat… Just imagine if this missile had been launched at Dulles Airport or JFK, or the airports in Paris, London, or Berlin. That’s what we’re talking about here. That’s what Iran is actively supporting.”