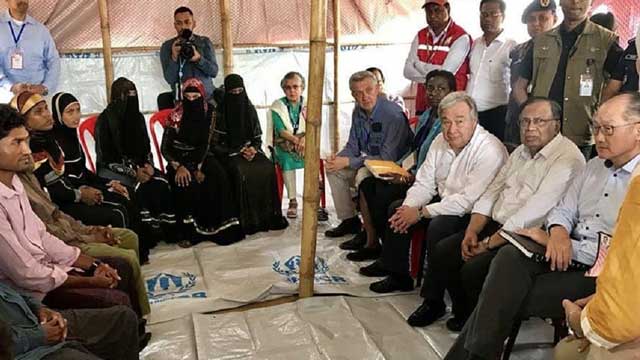 The UN Secretary General Antonio Guterres has said they cannot allow the monsoons to wash away hopes of Rohingyas living in Cox's Bazar camps.

"The horrific stories of suffering in Myanmar I heard from Rohingya refugees in Bangladesh last July remain vivid in my memory. A year later, their shelters are once again threatened by the monsoon season. We cannot allow the monsoons to wash away their hopes," the UN chief tweeted on Monday.

Bangladesh is now hosting over 1.2 million Rohingyas in Cox's Bazar district and most of them entered Bangladesh since August 25, 2017 amid military crackdowns against Rohingyas in Rakhine State of Myanmar.

Five days of heavy rains and winds have pounded Rohingya camps in the district displacing over 2,700, damaging over 3,400 houses and leaving two people dead, said IOM.

“We’re only half way into the monsoon season and helped over 2,000 people in the past 72 hours. Our teams have been working round the clock,” said spokesman of International Organization for Migration (IOM) George McLeod on Monday.

The destruction – triggered by monsoon weather systems sweeping into the Bay of Bengal – saw IOM staff and volunteers working throughout the camps to repair damaged structures and relocate the hardest-hit families to emergency shelters, according to an IOM media release.

Records from rain gauges between July 3-5 in the Kutupalong mega camp showed 510 mm while camp 16 – another major settlement – recorded 530 mm.

IOM and partners, including UNHCR and WFP, have been preparing for the monsoon and cyclone season since late 2018 through infrastructure upgrades and awareness-raising campaigns in both the camps and host communities.

The rains and wind are expected to continue this week.