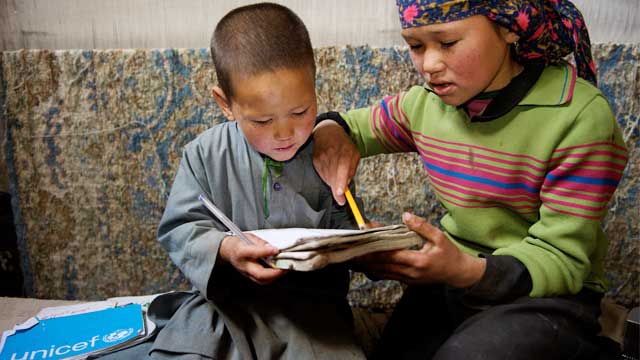 Over 17 million children were estimated to be living in internal displacement triggered by conflict and violence as of the end of 2018, according to new research from the UN Children’s Fund (UNICEF) and the Internal Displacement Monitoring Centre (IDMC).

The research will be launched today in New York at the High-Level Political Forum, where States will share progress towards achieving the Sustainable Development Goals (SDGs), with a focus on the education goal.

“Internally displaced children and youth are virtually guaranteed to see their education interrupted, yet dedicated support to minimize these effects, especially during conflicts, is sorely lacking,” said Laurence Chandy, UNICEF Director for Data, Research and Policy.

Within the figure of 17 million are more than 6.2 million girls and 6.4 million boys of primary or secondary school age. Most of them live in sub-Saharan Africa, where even non-displaced children often face challenges in accessing quality education. In addition to the 17 million children whose are internally displaced by conflict and violence, millions more are thought to be displaced because of disasters, climate change and other causes. A further 5 million youth, aged between 18 – 24, were also displaced as of the end of 2018.

“The internal displacement of children is a globally overlooked issue,” said Alexandra Bilak, Director of IDMC.

“These children are largely invisible in global and national data collection, which makes it difficult to understand the scale and impacts of the issue; harder still to provide targeted support.”

The reports, entitled ‘Equitable access to quality education for internally displaced children’ and ‘Protecting the rights of internally displaced children in urban settings’, show barriers to education include; persistent insecurity, social tensions, discrimination, a lack of capacity and resources, a lack of access to services and information, financial barriers and missing documentation.

Within a global context of increasing urbanisation, internal displacement is more often taking place in, or being driven to, towns and cities. This presents specific challenges but also opportunities, according to the report.

“Local authorities are key to finding long-term solutions for the displacement of children in urban areas, including investment and policies that specifically address the issue in local and national plans and budgets,” added Alexandra Bilak of IDMC.