Trump acts to cut prescription drug prices in US 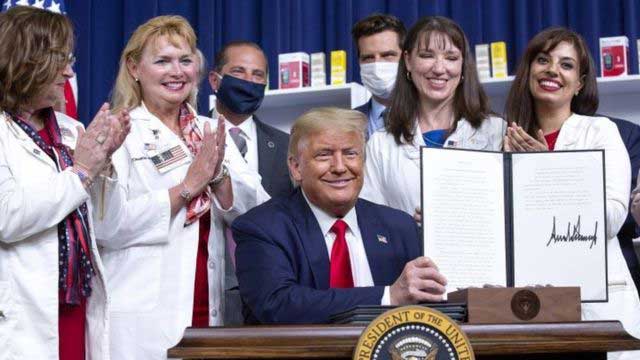 The measures would allow discounts and import of cheaper drugs from abroad.

Mr Trump will meet pharmaceutical bosses on Tuesday, but some industry analysts have criticised the move, saying it would not have much effect.

"This administration has decided to pursue a radical and dangerous policy to set prices based on rates paid in countries that he [President Trump] has labelled as socialist, which will harm patients today and into the future," Pharmaceutical Research and Manufacturers of America said in a statement.

It said Mr Trump's move was "a reckless distraction that impedes our ability to respond to the current [coronavirus] pandemic - and those we could face in the future".

Media captionThe lost six weeks when the US failed to control the virus
President Trump's administration has been criticised for its response for the worsening Covid-19 crises, as the number of confirmed virus-related deaths in America has now topped 145,000.-BBC