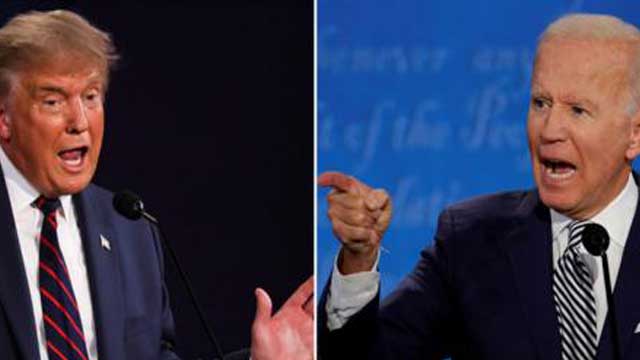 President Donald Trump and his challenger Joe Biden have fiercely clashed in one of the most chaotic and rancorous White House debates in years.

Amid angry shouting and name calling, the two fought over the pandemic, white supremacy and the economy during the 90-minute forum in Cleveland, Ohio.

Mr Biden called the president a "clown" and told him to "shut up". Mr Trump brought up drug use by his rival's son.

But with 35 days until election day, surveys from several important states show a closer contest.

The debate focused on six topics in 15-minute segments - the candidates' records, the Supreme Court, the pandemic, race, election integrity and the economy.

In a vitriolic back and forth punctuated by insults, Mr Biden, 77, told Mr Trump, 74: "You're the worst president America has ever had."

How did they clash on race and white supremacy?

In one of the most talked about exchanges of the night, the president was asked by the moderator if he was prepared to condemn white supremacists.

He initially said he would but when asked to denounce the far-right Proud Boys group by name, he sidestepped.

Mr Trump said: "Proud Boys, stand back and stand by, but I'll tell you what, somebody's got to do something about antifa and the left."

Earlier, Mr Biden said: "This is a president who has used everything as a dog whistle to try to generate racist hatred, racist division."

Mr Trump countered that Mr Biden, while supporting the 1994 crime bill, had referred to African Americans as "super predators".

The Democrat denied saying such a thing. In 1993, while chairman of the Senate Judiciary Committee, Mr Biden warned of "predators on our streets" who were "beyond the pale".

Mr Trump also said: "You can't even say the word 'law enforcement' because if you did say those words you would lose all of your radical left supporters."

What did they say about coronavirus?

Due to the pandemic, the debate at Case Western Reserve University had a small, socially distanced audience and the traditional opening handshake was skipped.

Mr Biden rubbished Trump's leadership on the coronavirus pandemic, which has killed more than 200,000 Americans.

"He panicked or he looked at the stock market," the Democrat said of the president, who wants states to reopen their economies.

"A lot of people died and a lot more are going to die unless he gets a lot smarter, a lot quicker," Mr Biden said.

Local rules required everyone in the room to wear masks, but of the president's family members present only US First Lady Melania Trump donned a face covering during the debate.-BBC