Trump can be discharged as early as Monday, says his medical team 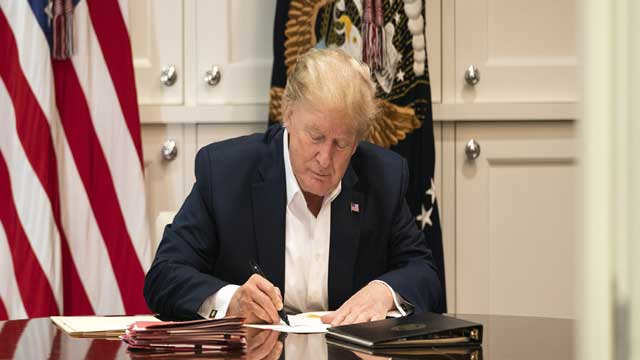 US President Donald Trump’s medical team has said that he experienced two episodes of blood-oxygen drops but has remained without fever since Friday morning and his vital signs are stable. “He could be discharged to the White House as early as Monday,” they said.

The 74-year-old is undergoing treatment for Covid-19 at a military hospital in Bethesda, Maryland.

He has completed a second dose of Remdesivir, and his kidney and liver functions were normal, his medical team added.

Earlier in the day, White House Chief of Staff Mark Meadows had revealed that the condition of the President was more critical than officials had made public. According to reports on Friday, Trump was experiencing “mild symptoms” and continuing to work.

“I can tell you this the biggest thing we see is with no fever now, and with him doing really well with his oxygen saturation levels,” Meadows said during an interview with Fox News broadcast.

First Lady Melania Trump, who also tested positive for the coronavirus along with her husband on Thursday evening, was recuperating at the White House where she remained “well with only a mild cough and headache”.

A number of US President’s aides and advisors were also tested positive for the virus. Kellyanne Conway, a former adviser to Trump, Bill Stepien, head of the Trump re-election campaign, and Chris Christie, the former New Jersey governor who helped Trump prepare for the first presidential debate against Democratic rival Joe Biden were tested positive one after the other.