Who is ahead-Trump or Biden? 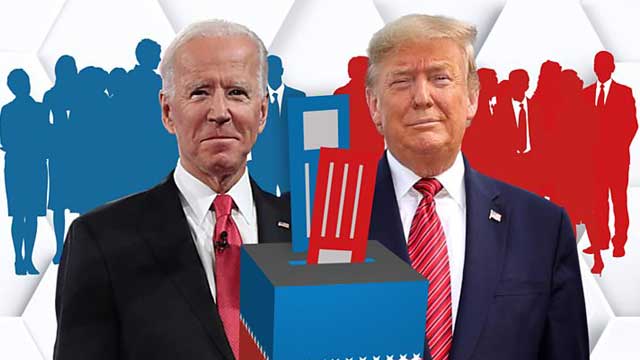 Voters in America will decide on 3 November whether Donald Trump remains in the White House for another four years.

The Republican president is being challenged by Democratic Party nominee Joe Biden, who is best known as Barack Obama's vice-president but has been in US politics since the 1970s.

As election day approaches, polling companies will be trying to gauge the mood of the nation by asking voters which candidate they prefer.

We'll be keeping track of those polls here and trying to work out what they can and can't tell us about who will win the election.

National polls are a good guide as to how popular a candidate is across the country as a whole, but they're not necessarily a good way to predict the result of the election.

In 2016, for example, Hillary Clinton led in the polls and won nearly three million more votes than Donald Trump, but she still lost - that's because the US uses an electoral college system, so winning the most votes doesn't always win you the election.

With that caveat aside, Joe Biden has been ahead of Donald Trump in most national polls since the start of the year. He has hovered around 50% in recent months and has had a 10-point lead on occasions.

Which states will decide this election?

As Mrs Clinton discovered in 2016, the number of votes you win is less important than where you win them.

Most states nearly always vote the same way, meaning that in reality there are just a handful of states where both candidates stand a chance of winning. These are the places where the election will be won and lost and are known as battleground states.

In the electoral college system the US uses to elect its president, each state is given a number of votes based on how many members it sends to Congress - House and Senate. A total of 538 electoral college votes are up for grabs, so a candidate needs to hit 270 to win.

As the map above shows, some battleground states have a lot more electoral college votes on offer than others so candidates often spend a lot more time campaigning in them.

Who's leading in the battleground states?

At the moment, polls in the battleground states look good for Joe Biden, although the margins are tight in several of them.

Mr Biden appears to have strong leads in Michigan, Pennsylvania and Wisconsin - three industrial states his Republican rival won by margins of less than 1% to clinch victory in 2016.

But it's the battleground states where Mr Trump won big in 2016 that his campaign team will be most worried about. His winning margin in Iowa, Ohio and Texas was between 8-10% back then but it's currently looking much closer in all three.

That's one of the reasons why some political analysts rate his chances of re-election as low as things stand.

The Economist thinks Mr Biden is "very likely" to beat Mr Trump while FiveThirtyEight, a political analysis website, sees Mr Biden as "favoured" to win the election but says the president could still come out on top.-BBC