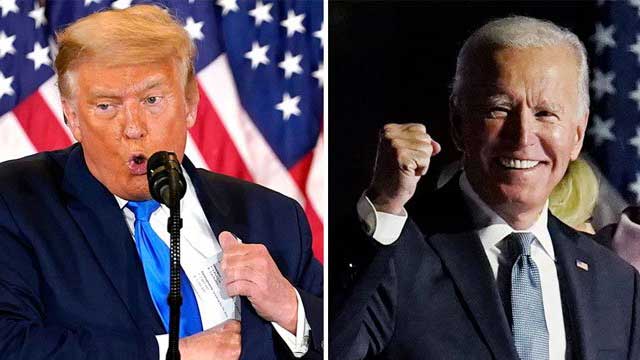 The US President-elect Joe Biden is hopeful Donald Trump will attend his inauguration next month in order to demonstrate a peaceful transfer of power, while adding that his predecessor’s presence would be of “no personal consequence” for him.

Talking to CNN’s Jake Tapper alongside vice president-elect Kamala Harris in their first joint interview since the election on Thursday, Mr Biden was asked whether he wanted Mr Trump to attend the 20 January event.

Mr Biden said the outgoing president’s presence would be “important in only one sense”.

“Not in a personal sense, important in a sense that we are able to demonstrate at the end of this chaos – that he's created – that there is a peaceful transfer of power with the competing parties standing there, shaking hands, and moving on," said Mr Biden.

"It is totally his decision and it’s of no personal consequence to me," he added, "but I do think it is for the country."

Mr Biden is set to be sworn in as president at midday on 20 January, and has already announced several members of his cabinet team even while Mr Trump continues to refuse to concede.

Mr Trump hasn’t yet said whether he will be attending the inaugural event or not but according to a report published by NBC News on Wednesday, he is planning to skip it and will not even invite Mr Biden and his wife Dr Jill Biden to visit the White House beforehand, as is the custom.

When Mr Trump was elected in 2016, he was invited by the then-outgoing president Barack Obama.

Several US media reports have also said Mr Trump could announce his 2024 presidential run around the same time, something that has been hinted by many of his aides.

Last week the Daily Beast reported through sources that the president is not only certain of running in 2024, but he also plans to make the announcement during the inauguration week or even the same day if his legal efforts to overturn the election do not yield any results.

The president’s team has reportedly already started working on preparations for a run to reclaim the White House, and Mr Trump told a gathering of the Republican National Committee this week that he would “see them in four years”.-The Independent