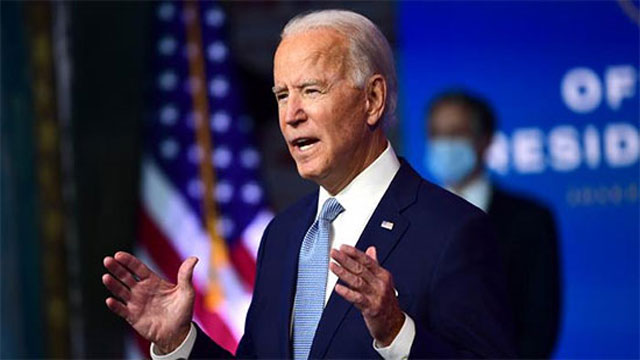 Electors will gather in state capitols across the country on Monday to formally vote for Joe Biden as the next US president, effectively ending President Donald Trump's frenzied but failing attempt to overturn his loss in the November 3 election.

The state-by-state votes, traditionally an afterthought, have taken on outsized significance this year in light of Trump's unprecedented assault on the nation's democratic process. Pushing false claims of widespread fraud, Trump has pressured state officials to throw the election results out and declare him the winner.

In the United States, a candidate becomes president not by winning a majority of the national popular vote but through an Electoral College system, which allots electoral votes to the 50 states and the District of Columbia largely based on their population.

In capitols such as Lansing, Michigan; Harrisburg, Pennsylvania; and Atlanta, Georgia, electors - typically party loyalists - will gather to formally cast those votes.

While there are sometimes a handful of "rogue" electors who vote for someone other than the winner of their state's popular vote, the vast majority rubber-stamp their state's results, and officials do not expect anything different on Monday.

Trump has called on Republican state legislators to appoint their own electors, essentially ignoring the will of the voters. State lawmakers have largely dismissed the idea.

The votes cast on Monday will be sent to Congress to be officially counted on January 6, the final stage of America's complex election process.

Trump said late last month he will leave the White House if the Electoral College votes for Biden, but has since pressed on with his unprecedented campaign to overturn his defeat, filing without success numerous lawsuits challenging state vote counts. On Friday, the U.S. Supreme Court dismissed a lawsuit filed by Texas that sought to invalidate the results in four states that Biden won.

Once the Electoral College vote is complete, Trump's sole remaining gambit would be to convince Congress not to certify the count on Jan. 6. Federal law allows individual lawmakers to challenge states' electoral votes, which prompts both the House of Representatives and the Senate to debate the objections before voting on whether to sustain them.

Mo Brooks, a conservative Republican congressman, has vowed to file challenges when Congress reviews the vote next month, though it is all but certain both chambers would reject his effort. Democrats control the House, while several moderate Republicans in the Senate have already publicly accepted Biden's victory.

'LANDMINES'
In 2016, Trump won the Electoral College despite losing the popular vote to Democrat Hillary Clinton by nearly 3 million votes. The formal vote earned extra attention when some Democratic activists called for electors to "go rogue" against Trump. In the end, seven electors broke ranks, an unusually high number but still far too few to sway the outcome.

Even if Monday's vote runs smoothly, Trump's efforts - such as encouraging state legislatures to appoint their own sets of "dueling" electors - have exposed the potential flaws in the system, said Robert Alexander, a professor at Ohio Northern University who has written a book about the Electoral College.

"There are a lot of landmines in the Electoral College, and this election really revealed a lot of them," he said.

While the electoral votes normally involve some pomp and circumstance, most events this year will be significantly scaled back due to the coronavirus pandemic.

In Michigan, for instance, the 16 electors are allowed to bring only a single guest; Arizona has shifted its ceremony from the capitol building to an unassuming government facility and pared down the list of invitees. At least one state, Nevada, intends to hold its electoral vote entirely virtually.

The process of choosing electors varies by state. In some, state parties pick electors at local or state conventions, while in others, the party leadership chooses the slate. In Pennsylvania, the presidential candidates themselves pick their electors, while in California, Democratic congressional nominees select them.

A few electors, such as Stacey Abrams, the former Georgia gubernatorial candidate, are well known political figures. But most are longtime state party devotees, such as Bonnie Lauria, a retired General Motors worker in West Branch, Michigan.

"I've held most offices, from the local level up to state central," the 79-year-old said. "This is one I haven't had the privilege of being part of. I'm glad it's my turn."

Another Michigan Democratic elector, Blake Mazurek, a 52-year-old history teacher, said he hopes the vote sends a message that the democratic system is still functioning despite Trump's rhetoric.

"I hope there's a sense of assurance to many in America that our country is not entirely broken," he said.-Reuters