McConnell for the first time recognizes Biden as President-elect 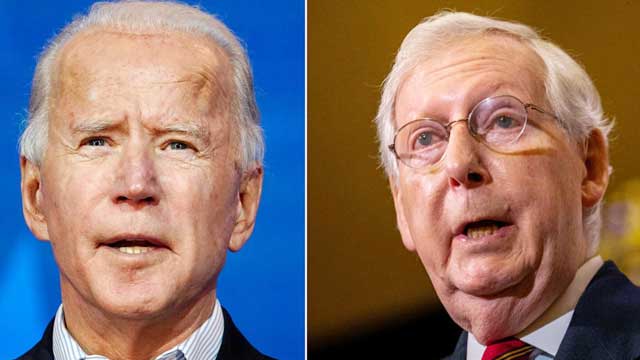 "The electoral college has spoken," McConnell said in remarks from the Senate floor in the US Capitol, adding, "Today I want to congratulate President-elect Joe Biden."
McConnell's comments are significant given that many Senate Republicans still wouldn't recognize Biden's victory on Monday evening even after the Electoral College made the win official.

Democrats have criticized Republicans' refusal to accept the outcome of the Election, and highlighted how it took more than 40 days since Americans went to the polls for many GOP members of Congress to speak up.

"The fact that it took six weeks for my colleagues to recognize reality and stop undermining our Democratic process is sad and disappointing," said Senate Democratic Whip Dick Durbin in a floor speech Tuesday following McConnell's remarks.

Senate Minority Leader Chuck Schumer said Tuesday that Trump needs to "take his cue from Leader McConnell, that it's time to end his term," in a floor speech and also called on his GOP colleagues to follow suit.

"Our Republican colleagues, for the sake of our democracy, for the sake of the peaceful transition of power, should stop the shenanigans," Schumer said "Stop the misrepresentations and acknowledge that Joe Biden will be our next president."

McConnell, a Kentucky Republican, made his comments after praising the Trump presidency in the past tense, touting his administration's accomplishments, including the country's "economic prosperity," "foreign policy," judicial appointments, and "bold regulatory changes" in a floor speech.

"It would take far more than one speech to catalog all the major wins the Trump administration has helped deliver for the American people," he said. "The outsider who swore he would shake up Washington and lead our country to new accomplishments, both at home and abroad proceeded to do exactly that. President Trump and Vice President Mike Pence deserve our thanks and our gratitude for their tireless work and their essential roles in all these victories and in many more."

McConnell said while millions wished the election would have yielded a different result, "our system of government has processes to determine who will be sworn in on January the 20th. The Electoral College has spoken."

Trump, even in defeat, holds enormous sway over his party, to the point where many refuse to publicly accept electoral reality or raise any concerns as the President continues to undermine the integrity of US democracy by lying that the election was rigged and stolen from him. House Minority Leader Kevin McCarthy has yet to acknowledge Biden's victory.

Pressed multiple times Monday about whether he'd accept Biden as President-elect, Sen. Steve Daines, a Montana Republican, continued to point to how Trump had won his state's electoral votes.

"Montana cast three electoral votes for President Trump, and the Electoral College voted today," said Daines, who just won reelection in Montana. "And Congress will need to ratify in January."

Following McConnell's remarks, Republican Sen. Rick Scott of Florida, who is in GOP leadership, would not say if Biden is President-elect, when asked by CNN. The Florida Republican did say, however, that the Electoral College has voted and "there will be a smooth transition of power on the 20th of January."

Still on Monday evening, following the Electoral College process, some GOP members of Congress were signaling they were more willing to accept Biden's victory.

Sen. Roy Blunt of Missouri, a member of Senate GOP leadership who leads the congressional inauguration committee, said they will meet soon to discuss the ceremony to inaugurate Biden on January 20. Just last week, he and other GOP leaders had rejected a Democratic effort to formally note that the committee was preparing for Biden's inauguration.

Two other members of GOP leadership -- Senate Majority Whip John Thune of South Dakota and Sen. John Cornyn of Texas -- both said that any effort to overturn the election results on January 6, when a joint of session of Congress meets to count the electoral votes, would be fruitless.

"In the end at some point you have to face the music," Thune said Monday on his way to McConnell's office for a leadership meeting. "And I think once the Electoral College settles the issue today, it's time for everybody to move on."

"I think everybody realized it yesterday that counting the voting of the electors was a pivotal moment, and I agree," Cornyn told reporters Tuesday, when asked if he recognizes Biden as President-elect.

Asked whether Trump should concede, or congratulate Biden, Cornyn said he isn't going to give any advice to the President, but "I think he will do the right thing."-CNN