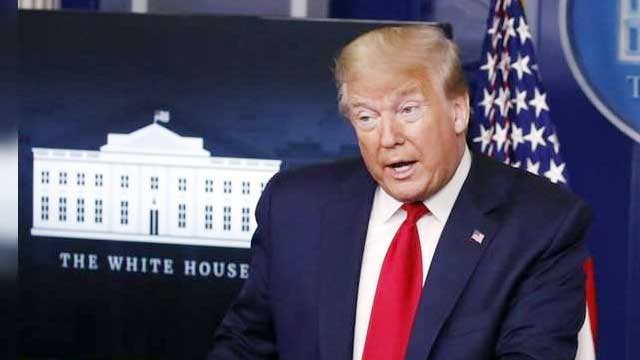 US President Trump has urged Congress to amend a $900bn (£670bn) coronavirus relief bill to more than triple its stimulus payments to Americans.

In a video message posted on Twitter, he said the package "really is a disgrace", full of "wasteful" items.

"It's called the Covid relief bill, but it has almost nothing to do with Covid," he said.

His statement stunned Capitol Hill. Republicans and Democrats have been negotiating a coronavirus stimulus rescue package since July and Mr Trump - who has largely stayed out of the talks - had been expected to sign the legislation into law following its passage through Congress on Monday night.

The package of measures is linked to a bigger government spending bill, which includes foreign aid funding as well as a $1.4tn spending measure to fund federal agencies for the next nine months. Those agencies will have to shut if the president vetoes or refuses to sign it by midnight next Monday.

Most legislation that comes from Congress requires the approval of the president before becoming law.

However, Mr Trump has not specifically said he would veto the bill. Even if he does, US media say there could be enough votes from both Democrats and Republicans in Congress to override his veto.

What did Trump say?

In Tuesday night's message from the White House, Mr Trump baulked at spending in the bill on other countries, arguing that this money should go to struggling Americans.

He said: "This bill contains $85.5m for assistance to Cambodia, $134m to Burma, $1.3bn for Egypt and the Egyptian military, which will go out and buy almost exclusively Russian military equipment, $25m for democracy and gender programmes in Pakistan, $505m to Belize, Costa Rica, El Salvador, Guatemala, Honduras, Nicaragua, and Panama."

The president questioned why the Kennedy Center, a performing arts complex in Washington DC, was set to receive $40m when it is not open, and more than $1bn has been allocated to museums and galleries in the capital.

Mr Trump concluded: "Congress found plenty of money for foreign countries, lobbyists and special interests, while sending the bare minimum to the American people who need it. It wasn't their fault. It was China's fault.