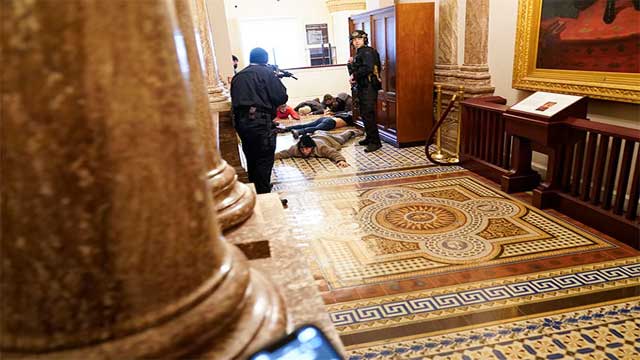 White House deputy national security adviser Matt Pottinger has resigned, according to media reports, joining a number of officials who are leaving the administration of Donald Trump in the wake of violence on Capitol Hill.

Pottinger resigned on Wednesday afternoon in response to the President’s reaction to a mob of protesters who breached the U.S. Capitol, CNN reported, citing a person close to Pottinger. Bloomberg first reported the resignation of Pottinger, a leading figure in the development of Trump’s China policy.

Four people died during the chaos - one from gunshot wounds and three from medical emergencies - after hundreds of Trump’s supporters stormed the Capitol in a bid to overturn his election defeat to Democrat Joe Biden.

In a video posted to Twitter while the rioters roamed the Capitol, Trump called the protesters “special” and repeated his false claims about election fraud, although he urged protesters to leave.

The melee delayed the certification process of Biden’s victory for hours. Biden will be inaugurated on Jan. 20.

Stephanie Grisham resigned as chief of staff to the first lady.

“It has been an honor to serve the country in the White House. I am very proud to have been a part of Mrs. Trump’s mission to help children everywhere, and proud of the many accomplishments of this administration,” Grisham said in a statement.

Grisham, who spent a year as White House press secretary before becoming chief of staff to the first lady, did not say whether her resignation was in reaction to the violence in the nation’s capital, but a source familiar with her decision said it was the last straw for her.

There was also talk inside the White House that deputy chief of staff Chris Liddell might resign, a source said.-Reuters