Biden ends US support for Saudi Arabia in Yemen, says war 'has to end' 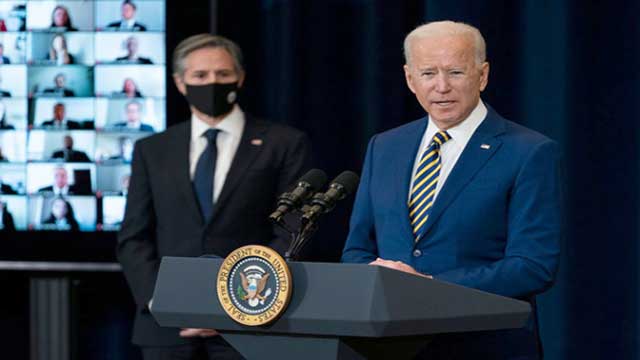 President Joe Biden yesterday declared a halt to US support for a Saudi Arabia-led military campaign in Yemen, demanding that the more than six-year war, widely seen as a proxy conflict between Saudi Arabia and Iran, "has to end."

Biden also named veteran US diplomat Timothy Lenderking as the US special envoy for Yemen in a bid to step up American diplomacy "to end the war in Yemen, a war which has created humanitarian and strategic catastrophe."

The United Nations describes Yemen as the world's biggest humanitarian crisis, with 80% of its people in need and millions on the verge of a large-scale famine.

"This war has to end," the Democratic president said during a visit to the U.S. State Department in Washington. "And to underscore our commitment, we're ending all American support for offensive operations in the war in Yemen, including relevant arms sales."

The move is a reversal of a policy of both the Democratic Obama and Republican Trump administrations. Biden was vice president in the Obama administration.

"At the same time," he said on Thursday, "Saudi Arabia faces missile attacks, UAV (drone) strikes and other threats from Iranian-supplied forces in multiple countries. We're going to continue to support and help Saudi Arabia defend its sovereignty and its territorial integrity and its people."

The Saudi-led military coalition intervened in Yemen in 2015, backing government forces fighting the Iran-aligned Houthis. U.N. officials are trying to revive peace talks to end the war as the country's suffering is also worsened by an economic crisis, currency collapse, and the COVID-19 pandemic.

'HOPE FOR YEMEN'
Under the Trump administration, policy on Yemen was secondary to a so-called "maximum pressure" sanctions campaign against Iran in a bid to force Tehran back into talks over its nuclear and missile programs and activities in the Middle East.

This was despite demands by Republican and Democratic lawmakers for an end to U.S. support for Riyadh as the civilian death toll in Yemen mounted and the humanitarian crisis worsened.

Biden's national security adviser Jake Sullivan said earlier on Thursday that the end of U.S. support for the Saudi-led coalition's operations in Yemen does not extend to efforts to combat the regional affiliate of the al Qaeda militant group.

Sullivan said the Biden administration already had halted two sales of precision-guided munitions and kept regional allies in the region informed of actions to avoid surprises.

"Any move that reduces the number of weapons, military activity, is to be welcomed and will give more space and more hope not only to the talks, but importantly more hope to the people of Yemen," U.N. spokesman Stephane Dujarric said on Thursday.

The State Department is also reviewing a Trump administration designation last month of the Houthis as a foreign terrorist organization.

The United Nations and aid groups have called for the designation to be reversed, warning it would push Yemen into a large-scale famine. The Biden administration last week approved all transactions involving Yemen's Houthi movement for the next month as it carries out the review.-Reuters