US allies are upset 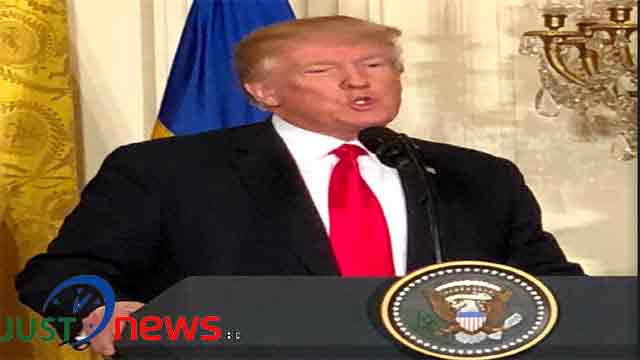 Washington, Mar 8 (Just News): The US President Donald Trump's demand that new tariffs be slapped on steel and aluminum imports has spooked markets, prompted his chief economist's resignation, rattled major US allies and widened a rift with establishment Republicans.

But he nevertheless signaled on Thursday he was intent on moving forward, despite the lingering legal questions and steep resistance from opponents.

The move was widely expected to set off a trade battle that Trump insists the US can win -- but which even some of his closest advisers worry could seriously damage a growing American economy.

Trump offered indications on Thursday he was willing to exclude some countries from the tariffs for national security reasons, a softening of his initial insistence that no exclusions would apply. But he maintained that the figures he announced last week -- a 25% tariff on steel and a 10% tariff on aluminum -- would stand.

The tariff dispute was set to culminate during a 3:30 p.m. ET event at the White House. Trump has invited representatives from the steel and aluminum industry to bolster his case that tariffs will improve job conditions and benefit American plants.

On Thursday morning, the situation was still shrouded in uncertainty. Multiple officials awoke with no clear picture of what Trump was prepared to sign during the afternoon event. Advisers have been scrambling since last week to finalize details on steel and aluminum tariffs after Trump announced he would impose them during a meeting with industry executives.

Multiple senior administration officials familiar with the planning said Trump was prepared to sign something on Thursday afternoon -- though actual details of the document were still coming together through the morning. Advisers were prepared with a largely symbolic memo declaring Trump's intent to take action on steel tariffs in case a more substantive order wasn't final.

But by midday it appeared that formal language imposing new tariffs was ready to sign. Trump told reporters in the Cabinet Room that certain countries would be excluded, including Canada and Mexico, and kept open the possibility of excluding other nations like Australia, which are important national security allies.

An administration official said the final order would include a built-in mechanism to allow the President to exclude certain countries, but wouldn't itself include specific country exclusions.

The scramble over the tariffs has propelled the White House into further disarray over the past week. Trump's surprise announcement has already spooked markets, caused a rift with his closest allies on Capitol Hill, including House Speaker Paul Ryan, and prompted the resignation of his top economist Gary Cohn.

"He may be a globalist, but I still like him," Trump said Thursday of Cohn, who was sitting in the room and announced earlier this week he is resigning as director of the National Economic Council. "He is seriously a globalist, there is no question. But in his own way he's a nationalist because he loves our country."

On Wednesday and Thursday, aides described rapid-pace scheduling changes as Trump applied pressure on his staff to finish writing the tariff order.

Initially, aides had planned for a noon event on Thursday before moving the time to 3:30 p.m. ET. Facing persistent questions over the legality of the move, the event was pulled from the schedule and Trump determined he'd ink the measures next week. But on Thursday morning it was back on the schedule and Trump was previewing it himself on Twitter.

Representatives from the steel and aluminum industries have already begun convening in Washington ahead of an announcement. Trump had them flown in hoping to illustrate his move with workers whose production lines and plants might be bolstered.

But even as the afternoon event is being planned, administration officials were continuing to raise concern that excluding Canada and Mexico from the steel tariffs -- something Trump himself raised as a way to gain leverage in ongoing NAFTA negotiations -- could undercut the legal arguments for the tariffs themselves.

Trump's advisers insist the tariffs are necessary for national security and are using that argument as the legal basis for them. But NAFTA is unrelated to national security, and excluding Canada and Mexico for that reason could prompt legal challenges at the World Trade Organization.

The conundrum is one of the items that caused a hold-up in the signing, the officials said.

Trump has been frustrated by the delay, the officials say. He has insisted he be able to tout a completed tariffs plan when he campaigns for a Republican congressional candidate in Pennsylvania steel country on Saturday.

Meanwhile, major US allies hadn't yet been informed as of Thursday morning of final details on the tariff plan, including whether their steel exports will be subject to tariffs.

"Nothing," one western diplomat said when asked whether final word had yet come from the White House.

Top Republican lawmakers and the leaders from major US trading partners have resisted the tariffs plan. More the 100 GOP members of Congress wrote Trump on Wednesday urging him to "reconsider the idea of broad tariffs to avoid unintended negative consequences."

The European Union on Wednesday detailed a list of US-made goods that it would subject to reciprocal tariffs if Trump follows through with his plan. China also indicated it was preparing an appropriate response.

Trump has declared that trade wars are "easy to win" and campaigned on the promise to renew American industries by slapping barriers on trade from other countries.-CNN