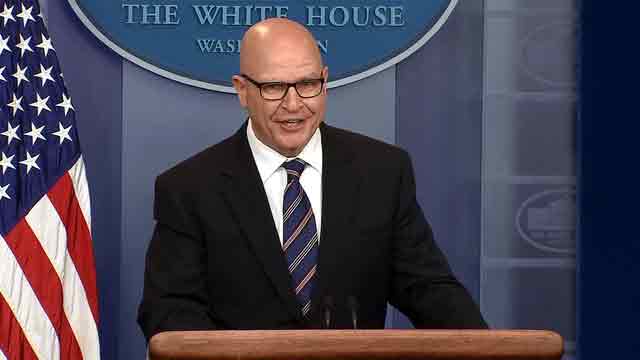 “After thirty-four years of service to our nation, I am requesting retirement from the U.S. Army effective this summer after which I will leave public service. Throughout my career it has been my greatest privilege to serve alongside extraordinary servicemembers and dedicated civilians.

I am thankful to President Donald J. Trump for the opportunity to serve him and our nation as national security advisor. I am grateful for the friendship and support of the members of the National Security Council who worked together to provide the President with the best options to protect and advance our national interests.

I am especially proud to have served alongside the men and women of the National Security Council Staff who established a strong foundation for protecting the American people, promoting American prosperity, achieving peace through strength, and advancing American influence. I know that these patriots will continue to serve our President and our nation with distinction.”

“H.R. McMaster has served his country with distinction for more than 30 years. He has won many battles and his bravery and toughness are legendary. General McMaster’s leadership of the National Security Council staff has helped my administration accomplish great things to bolster America’s national security. He helped develop our America First National Security Strategy, revitalize our alliances in the Middle East, smash ISIS, bring North Korea to the table, and strengthen our nation’s prosperity. This work and those achievements will ensure that America builds on its economic and military advantages. I thank General McMaster and his family for their service and wish them the very best.”

“LTG McMaster is a fine American and military officer. He has served with distinction and honor throughout his career in the U.S. Army and as the National Security Advisor. He brought and maintained discipline and energy to our vital interagency process. He helped develop options for the President and ensured that those options were presented fully and fairly. A true solider-scholar, his impact on his country and this government will be felt for years to come.”

On Background from a WH Official:

The President and General H.R. McMaster mutually agreed that General McMaster will resign as the National Security Advisor. McMaster will retire from the U.S. Army after 34 years of distinguished service.

The two have been discussing this for some time. The timeline was expedited as they both felt it was important to have the new team in place, instead of constant speculation. This was not related to any one moment or incident, rather it was the result of ongoing conversations between the two.

Upon the departure of Gen. McMaster, Ambassador John Bolton will take over as President Trump’s National Security Advisor.

Ambassador Bolton served as U.S. Permanent Representative to the United Nations from 2005-2006 and as Under Secretary of State for Arms Control and International Security from 2001-2005. He is one of the strongest voices and experts on the full range of national security issues and challenges facing the country.