Putin is a butcher: Biden 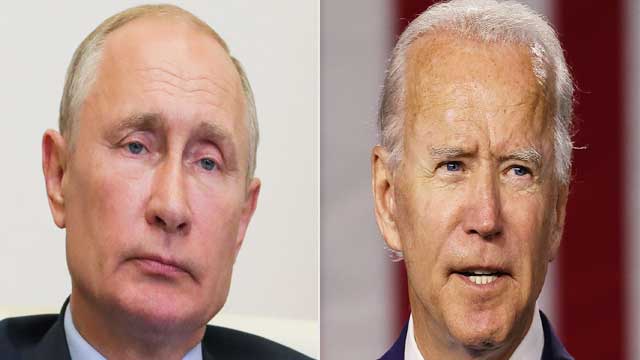 The US president Joe Biden termed Russian President Vladimir Putin a 'butcher' after holding emotional conversations with Ukrainian refugees – including a pair who fled the horror of the siege at Mariupol.

'He's a butcher,' Biden said when asked what he thought of Putin after what he has done to the people he was meeting.

His comment came as Russia bombed Lviv, a city in western Ukraine around 245 miles from Warsaw, where Biden is located. CNN reported the Russians hit a fuel depot as Biden prepared to make remarks on the war in the Ukraine.

Biden spent nearly an hour meeting with a series of refugees during a visit to World Central Kitchen, which set up an outpost in Warsaw as part of its efforts to help feed millions of Ukrainian refugees in Ukraine itself and in countries that are taking them in.

He offered hugs and words of comfort as he met with those who escaped the fighting and volunteers helping to feed and shelter the refugees.

'And you know, the Ukrainian people are here, each one of those children said something in effect, say a prayer for my dad, or my grandfather, or my brother. He's back there fighting,' Biden said.

'And I remember what it's like when they have someone in a war zone. Every morning you get up and you wonder you just wondering and pray you don't get that phone call. And they're amazing group of people,' he said, referencing his late son Beau for the second time in as many days during his visit.

Biden didn't have a an answer when asked about how it would be possible to get aide inside Mariupol, which has been subject to a relentless bombardment. The administration has drawn the line on anything that would involve U.S. boots on the ground, even while surging arms to the Ukrainian military and announcing an additional $1 billion in humanitarian aide.

Biden also commented on Russia's claim of a new military posture, after a Kremlin defense official announced the main part of the 'first stage' of its invasion was over and it would concentrate efforts on the Donbas region.

Asked what he thought of the change in Kremlin strategy – a question he avoided earlier in the day when meeting with Polish President Andrzej Duda – Biden responded: 'I'm not sure they have.'

Biden had a series of encounters with refugees outside a soccer stadium in Warsaw, where the disaster aid NGO had set up a series of stands to provide coffee, kielbasas, and even a donut food truck.

The president had conversations with a number of refugees through a translator while sporting a Beau Biden baseball cap.

At one point he picked up a girl in a pink jacket and held her in his arms.

He hugged another young woman and put his arms on her shoulders, asking his translator: 'How do you say, in Ukrainian, who do you owe those beautiful eyes to?' 'Your father or your mother? Who had the eyes?' he asked the woman, named Victoria.

One refugee, Ana Stryharchuk, didn't get to the chance to interact with Biden or get the autograph she was seeking. She was in the back with her mother trying to get a glimpse of the president, as agents tried to corral photographers and aides tried to get Polish agents from blocking camera shots.

She said she fled Kiev by car two days after the start of the invasion.

'It's really exciting but I don't see him at all,' she said of Biden/.

'Thank you for all the help that we are having from the United States,' she said.

Poland has born the brunt of the refugee crisis.

Some 3.5 million people have fled the Ukraine and nearly 2 million are in Poland, which shares a nearly 300-mile border with its neighbor.-Daily Mail