Trump remarks before marine one departure 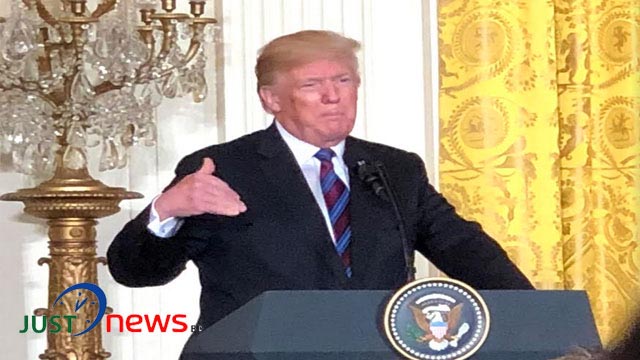 Washington, May 6 (Just News): THE PRESIDENT: I tell you what -- Rudy is a great guy, but he just started a day ago. But he really has his heart into it. He's working hard. He's learning the subject matter. And he's going to be issuing a statement too. But he is a great guy. He knows it's a witch hunt. That's what he knows. He's seen a lot of them. And he said he's never seen anything so horrible.

As an example, 33,000 emails requested by Congress with a subpoena, and they get burned, they get deleted. And nobody says anything. Give me a break.

So Rudy knows it's a witch hunt. He started yesterday. He'll get his facts straight. He's a great guy. But what he does is he feels it's a very bad thing for our country, and he happens to be right.

Q When did you find out what the retainer was being spent on?

THE PRESIDENT: Well, you're going to find out, because we're going to give a full list. And people know. And virtually everything said has been said incorrectly, and it's been said wrong, or it's been covered wrong by the press -- just like NBC and ABC yesterday covered the story wrong.

Q Mr. President, when are these Americans going to be released from North Korea?

And also, the trip is being scheduled. We now have a date and we have a location. We'll be announcing it soon.

Q Mr. President, have you changed your mind at all about being willing to sit with Robert Mueller?

If you look at the statements that were made, if you take a look, as an example, at the Rod Rosenstein letter to me, prior to the firing of James Comey, just read it; put it in the air. Your viewers don’t know about it. Put that letter on the air. It very much speaks very loudly, and that's just one thing.

THE PRESIDENT: Wait, wait. I have to find that we're going to be treated fairly, because everybody sees it now, and it is a pure witch hunt. Right now, it's a pure witch hunt. Why don’t we have Republicans looking also? Why aren’t we having Republican people doing what all these Democrats are doing? It is a very unfair thing. If I thought it was fair, I would override my lawyer.

And now I think, really, they're waiting to see what's going to happen on trade, because we're going to have some incredible trade deals announced. My people are coming back right now from China, and we will be doing something, one way or the other, with respect to what's happening in China.

And let me say this: I have great respect for President Xi. That's why we're being so nice. And we have a great relationship. But we have to bring fairness into trade between the U.S. and China. And we'll do it.