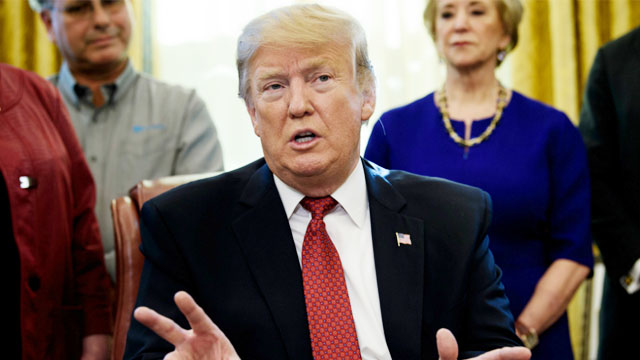 The US President Donald Trump said he will not accept a deal to avert another government shutdown without money for his long-desired border wall.

“No. Because if there’s no wall, it doesn’t work,” Trump told reporters on Thursday in the Oval Office when asked if he could accept border measures other than a wall.

Pelosi earlier said that Democrats remain adamantly opposed to wall funding, but could provide money for new fencing and other barriers in a spending bill.

“There's not going to be any wall money in the legislation,” Pelosi said during her weekly press briefing in the Capitol. “However, if they have some suggestions about certain localities where technology, some infrastructure [is appropriate] ... that’s part of the negotiation.”

Trump’s comments show he remains at an impasse with Democrats over his demand for a wall with a second shutdown looming in just over two weeks. They also raise the likelihood he may circumvent Congress in a bid to build the wall on his own.

The president said he would wait to see if Congress can come up with an agreement before the Feb. 15 funding deadline before he decides whether to declare a national emergency at the southern border.

But Trump did not sound optimistic negotiators would produce a bill he could support, accusing Speaker Nancy Pelosi (D-Calif.) of “playing games” and saying “I don’t think they’re going to make a deal.”

Trump voiced confidence he would win politically in the standoff with Pelosi, saying the 35-day shutdown that a majority of voters blamed on him was actually good because it “set the table for where we are now” in the debate over the wall.

Citing what he said is a threat posed by a new migrant caravan making its way toward the U.S., Trump claimed that “Nancy Pelosi will be begging for a wall.”

The president has repeatedly cast doubt on bipartisan spending talks that began on Wednesday, arguing earlier Thursday that Republicans were “wasting their time” by engaging with Democrats who oppose wall funding.

While Trump has previously said he would be open to calling structures along the border “steel slats” or a “barrier,” he said Thursday he would return to demanding a wall.

“Lets just call them WALLS from now on and stop playing political games! A WALL is a WALL!” Trump tweeted.

The comments are sure to frustrate Republican and Democratic lawmakers, who wanted Trump to step back from the border talks to give negotiators room to work out a deal.

“When the president stays out of the negotiations, we almost always succeed. When he mixes in it’s a formula for failure,” Senate Minority Leader Charles Schumer (D-N.Y.) said on Wednesday.

Trump had largely stayed out of the public eye after the federal government reopened last Friday, with the exception of some tweets.

He held no public events over the last five days until he spoke Thursday afternoon at a signing ceremony for an executive order.