State of the Union

US President Trump calls for unity 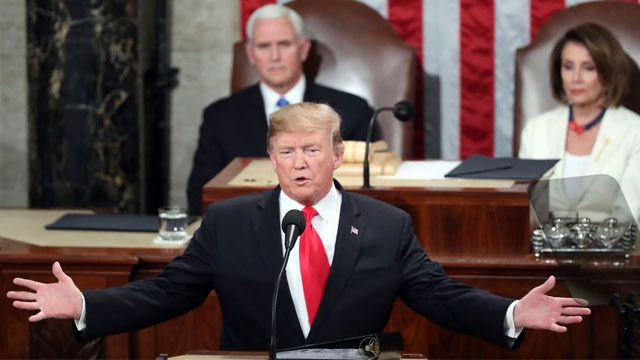 The US President Trump, in his State of the Union address, railed against "ridiculous" investigations and "politics of revenge" and pleaded for unity.

"Millions of our fellow citizens are watching us now, gathered in this great chamber, hoping that we will govern not as two parties, but as one nation," Trump said.

The President's annual State of the Union address on Tuesday held up a mirror for millions of television viewers of the rancorous, apparently unbridgeable ideological divides that hold Washington hostage and stifle a latent yearning for national unity.

Trump said, "Many of us campaigned on the same core promises: to defend American jobs and demand fair trade for American workers; to rebuild and revitalize our Nation's infrastructure; to reduce the price of healthcare and prescription drugs; to create an immigration system that is safe, lawful, modern and secure; and to pursue a foreign policy that puts America's interests first."

In a speech in which rhetorical calls for common ground jarred with the rigidity of his policy positions, Trump did make an apparently genuine effort to bring Americans together. He tried to combine key themes from his 2016 campaign into a patriotic creed behind which everyone could unite.

"I am asking you to choose greatness. No matter the trials we face, no matter the challenges to come, we must move go forward together. We must keep America first in our hearts," Trump said.

Apart from a pledge to work together on prescription drug prices, infrastructure and fighting cancer and HIV/AIDS, Trump offered few signs of flexibility on the political disputes that tear at national unity.

He signaled no retreat on his most quintessential, and divisive, campaign pledge, saying, "walls work and walls save lives," and raising the specter of "caravans" of migrants massing for a "tremendous onslaught" on the border.

"I will get it built," Trump said.

"An economic miracle is taking place in the United States -- and the only thing that can stop it are foolish wars, politics or ridiculous partisan investigations," Trump said, in an apparent reference to Democratic congressional probes of his administration and possibly to Special Counsel Robert Mueller's Russia investigation. "If there is going to be peace and legislation, there cannot be war and investigation. It just doesn't work that way."

Trump announced Tuesday night during his State of the Union address that he and North Korean leader Kim Jong Un will meet later this month in Vietnam ... Trump said he and Kim would meet on February 27 and 28. "If I had not been elected president of the United States, we would right now, in my opinion, be in a major war with North Korea," he added.

When Trump mentioned that 58% of newly created jobs had been filled by women, female Democratic lawmakers -- wearing white in a show of equality -- stood and cheered, effectively claiming the President's applause line for themselves.

"You weren't meant to do that," Trump said with a showman's timing and in a gesture of generosity, reclaiming the moment.

"Don't sit yet. You're going to like this," he said, before adding: "And exactly one century after Congress passed the constitutional amendment giving women the right to vote, we also have more women serving in Congress than at any time."

There was much rolling of eyes, shaking of heads and looks of contempt and bafflement in the Democratic ranks. Behind Trump, Pelosi at times scoffed or chuckled as Trump hit his most inflammatory lines.

At one point, as the address stretched well past the hour mark, Pelosi picked up her paper copy of the speech as if to see how much longer it would go on.

The evening was a clear sign from Trump that for all the speculation that he could finally broaden his appeal and court all Americans, his political course -- solidifying his base -- is set and irreversible heading into the 2020 election.

The President's most poetic call for national unity came when he decried the toxic politics in Washington that jarred with his opening line that everyone was gathered "not as two parties but as one nation."

"We must reject the politics of revenge, resistance and retribution," the President said.

Trump added, "In the 20th century, America saved freedom, transformed science, and redefined the middle class standard of living for the entire world to see. Now, we must step boldly and bravely into the next chapter of this great American adventure, and we must create a new standard of living for the 21st century. An amazing quality of life for all of our citizens is within our reach."

"We can make our communities safer, our families stronger, our culture richer, our faith deeper, and our middle class bigger and more prosperous than ever before."

He said, "Together, we can break decades of political stalemate. We can bridge old divisions, heal old wounds, build new coalitions, forge new solutions, and unlock the extraordinary promise of America's future. The decision is ours to make."